Stand by for whiny and dramatic. There is no other way to tell my day two…

There are 3421 stone stairs from Tikhedhunga to Ulleri, halfway to where we were going to spend the night. Ulleri is 2010 metres above sea level. So we woke up that morning peering in horrification (on my part) at a 500-metre climb over just two kilometres. There was going to be some pain. It was probably going to be mine.

I started off fairly well. I was happy. I was full of breakfast. I was charged with the joys of having done okay on day one. We had crossed a pretty smack-in-the-face fabulous suspension bridge.

I found a shop that proudly sold yak cheese and this amused me. It was a good way to start the morning. 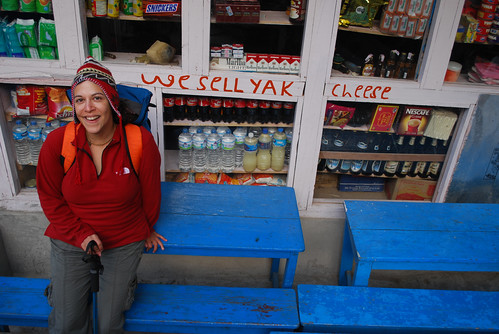 Then came the stairs. Oh dear…

It took me a long long time to get to Ghorepani. It was the stairs that did it. Hours and hours and hours of stairs, stairs, stairs. And by stairs I mean uneven rock shelves, some anklehigh, some toehigh, some requiring you to lift your foot higher than your knee, some barely a step at all, just a crumbly place of rock and dirt where your foot has to find the safest place to step.

My lungs kicked up a fuss the whole way. My heart hammered up a storm so I could feel it in my fingerstips when I sat down to rest. I’d collapse with legs like Bambi on those longed-for rock shelves, wheeeeeezing away as quietly as I could. All the while longing for some kind of giant yeti to burst from the trees and carry me up in his large hairy paws. 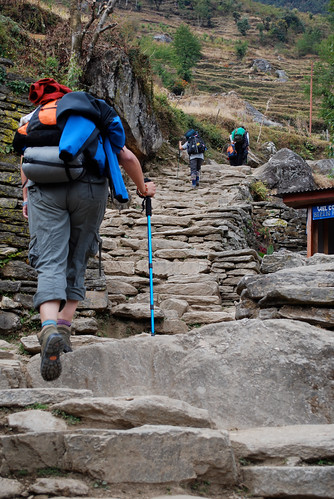 The horror that was the stairs

So went my climb. The only sounds were the distant click of my mini-kacha knitting row counter as Claire counted and climbed above me (she clicked every stair. Who knew a row counter could be so sporty?),

Claire and the clicker

the plodding thuds as my foot hit rock after rock, the thunk of my stick helping me along, and the harsh in and out hiss of my breath as we got higher and higher.

At Ulleri we stopped for hot black tea and all round congratualtions. We’d been joined by a trekking almost-vet called Claire (who would later impressively dance on a hilltop) and her guide (whose name I think was Doma). We clinked cups and ate dried mango and said “Well that wasn’t so bad”. The next 860 metres were meant to be not so steep and over a longer distance. Hooray for us. 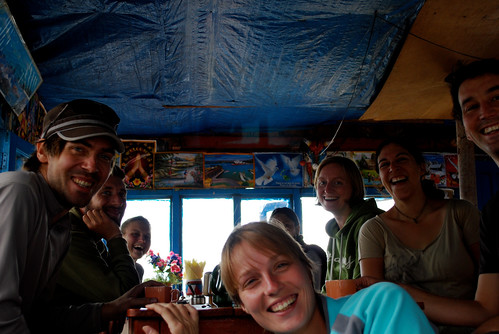 After our stop the trail moves out of the jaw-dropping mountain views onto twisty forest paths, leafcovered and streamcrossed. It is cool in the shadows and warm in the sunlight, and the flat parts let you look up at the moss-hung trees and swaying vines to imagine yourself smack bang in the middle of Snow White’s flee from the Wicked Queen’s clutches or Frodo’s journey from his cosy hobbit home.

Why the long face?

All ever so lovely. Except that I rarely looked up. My eyes were mostly groundwards because no smooth paths cut along the mountain and through the trees. This is a moutainside after all, and rocks rule everything. So as you climb you decide your route up the wide jagged steps. You’re focused all day long on step after step so your ankles remain unturned and you don’t wobble off into the ravine below.

The air thins as we get higher. My lungs work harder. My legs work too. I trudge on.

At one point we come out of the woods and stumble across an impressively drunken Nepali wedding. A few of the others get involved and get their boogie on around the madness of some fine woolly hats, passed out revellers, and a real lack of knowledge of who the bride and groom actually are. It looks like fabulous fun. 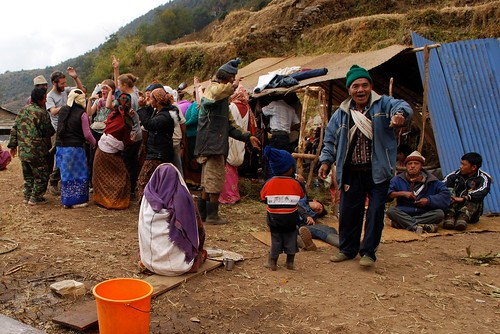 I lean against a wall and take the opportunity to breathe. There isn’t any boogie in me right at that moment, and still hours to go.

At another point we meet a man standing next to some knitting. He won’t let on whether the knitting is his or not. He is selling a fine selection of knitted goodies though. I tiredly take a photo. We walk on.

Whose knitting is this?

Eventually I stop thinking and become just a pair of feet and some lungs. I drop depressingly behind. M stops to wait for me over and over again. I scrabble around feebly for some kind of motivation, that I-can-damn-well-do-it kick I’ve always been able to find. It is increasingly hard to find. I am walking because I have to. And it is starting to get dark.

Falling behind a bit

We stop lots. Everyone looks a bit worn down. The shadows move in, and the clouds roll down to join them making it dark and chilly. I worry that I am slowing everyone down, and we’ll all get eaten by Nepali mountain forest wolves before we reach civilisation. When we stop to rest in the cloud-misty falling dark I attempt a very bad ‘gorillas in the mist’ joke. The word ‘gorillas’ comes out as ‘golliwas’. I try it again. Same. Not a good sign.

The cavalry that are my friends then comes to the rescue. They take my bag from me, they take my water bottle, M takes my sleeping bag, they say terribly encouraging things, and make me laugh. Now all I have to carry is me, and since I really am not a fan of the wolves eating any of us (are there even wolves in the Annapurna mountains?), I manage it. Just as the sun gives its last light the stairs come to an end. The warm lights of Ghorepani draw me in like a wheezing weaving moth (in an excellent woolly hat).

Beast legs by the fire and a cup of hot chocolate in my shaky paws it feels like Christmas. We laugh ourselves stupid and go to bed early. The air outside is below zero, and we’ll be up again at 4.30am in the morning. My legs snipe and moan at me as I climb the stairs to bed. I am too tired to tell them to shut up.

Not fashion but cosy