I have no idea how much further it is. All I can see is a circle of ascending stone steps in front of me which occasionally sparkle with night frost (leading me to think ‘Eeee! What if I slip!’ rather than ‘Oooo! Isn’t that purty?’), and a million billion stars overhead that seem to be looking down and gently twinkling ‘What in the hell do you think you are doing climbing 340 metres of perilous rock stairs with only a headtorch for light?!’ at me.

Far off in the distance I can hear the occasional snatch of the people ahead of me urging each other on, prayer flags flapping in the wind, and the crunch of M’s boots as his shuffles his feet to keep warm while he waits for me to catch up. Again. Bless.

The climb goes on (getting to be a theme this climbing and trekking). The sun creeps up towards the mountain tops, turning the black to grey then melting colour into my surroundings like ink through water. All the way up I am just plain angry at how tired I am already. Cursing myself for not staying tucked up in my down sleeping bag, and letting the rest of them do a climb they are much more cut out for. I really am rather rubbish.

Ahead of me an ancient Nepalese woman appears. She is climbing in socks and sandals, coughing herself up the hill and adjusting her headscarf to keep her ears warm. She stops for breath, I stop for breath. She heaves herself to her feet, I heave myself to mine.

Beating me to the top

Slowly, oh so horribly and shamefully slowly, the hilltop comes into view. Just as the sun hits the mountain top. “Go! Go!” I tell the camera-toting M, who races up the last stretch just in time to catch the sunrise.

The Nepalese woman and I puff to the top and nod a well done to each other. I finally get a moment to look up from my feet, and am only slightly surprised to find that I appear to be on top of the world. 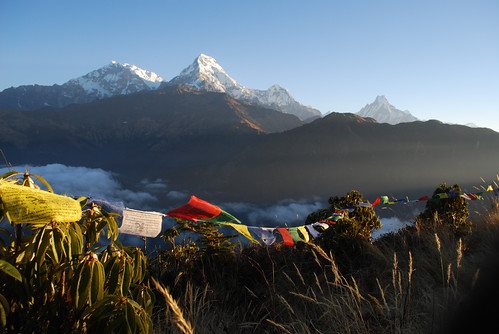 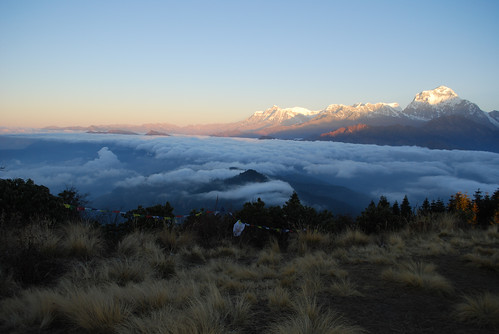 Heads of frosted mountain tops, with scarves of flowing clouds swirling around their necks, hiding the world below, meet my gaze. The sun paints the snow and mists orange pink, and every direction is so mesmerising to look at that it is almost painful for the brain to take it in. Even as my cheeks froze, and my fingers and toes turned to ice, it was really hard to care if later on frostbitten appendages would come away when you removed your socks and gloves. This was what all that climbing was for. Just this. (insert sigh of contentment here)

Me and a frozen M

Bit proud of herself

Thing is once you get up there you have to come down. I was starting to find all this climbing and descending to be a bit of a bitch. A lot of a bitch. The kind of bitch that comes uninvited to your party, drinks all your good wine, flirts with everyone’s boyfriends, throws up in your sock drawer, leaves bits of nacho in your homemade extra chilli so-painful-it-is-too-good salsa, hogs the only good karaoke microphone, gets nasty pink lipstick on the towels in your bathroom, steps on your cat in her high heels, and leaves to go home with the cashmerino scarf you have just spent the last month knitting yourself wrapped around her too-skinny throat, only to leave it on the tube where it is spirited away to the other end of the Northern line, and ends up being used by a post-pub kebab eater to wipe their chilli sauce fingers on, later to be appropriated by tube mice who build nests in it for their sooty hearingless offspring. In other words I was giving up.

Are we nearly there yet?

I hate to give up. I hate to go back. But over breakfast, I confess, I was weak and I talked about going back. M’s knee, messed up from an old war wound (read as football injury), was not faring well either.

But the next two days would be downhill. We would descend 1670 metres into the deepest valley in the world.  For some reason downhill sounded not so scary, and then someone told me there would be hot springs at the other end. Hot springs, you say?

So we carried on. Yay! And day three turned out to be my favourite. The six of us wound down the valley, past farms where buffalo mooed proudly over their wibbly-legged calves, and women sang while they threshed corn (causing a round of applause from us which we hoped didn’t mean something offensive in Nepali culture). The clouds drifted across soul-recharging views, children raced hoops and sticks up village pathways, and every person passed us with a friendly ‘namaste’ and a smile.

Lunch, at Mike’s restaurant (no relation)

, had possibly the best views I have ever eaten noodles to.

And, to make it all even more Swiss-Family-Robinson smiley, my lungs were blissfully quiet. Downhill seemed to agree with them.

Along the way we saw Maoist symbols and slogans, illustrating how Nepal has being the stage for a lot of change over recent years. They finally ended the rule of their monarchy in 2007 after a long and often violent struggle between Maoists and the government, and in 2008 they elected their first president. Anyone who is interested can see the BBC’s timeline here. Hard to see all that angry political passion amongst people who smile from doorways and chase goats out of their vegetable patches.

I’ll let the photos do the rest of the talking…

Do you serve Winalot perchance?

Say cheese! Or make cheese. Up to you.

Trackside tiny in the sun

Really rather glad I didn’t go back. 🙂