Posted by Deadly Knitshade on Dec 2, 2008 in Knitting, Nepal, Once in a Lifetime Stuff, Purl Interrupted, Sights, Travel, Trekking | 2 Comments

“No network coverage” my phone told me. We’d only just stepped out of the taxi at Naya Pul, the start of our trek. It was cold. It was frightfully early in the morning. Six Brits (we’d joined another couple, Claire and Simon, who Chris and Anna met in India) smiling nervously for the camera over cups of hot chai in a damp and chilly roadside hut. We were off to the middle of the mountains with no guide. It was okay though. I had my woolly hat and my knitting. What more does a girl trekking to thousands of metres need? 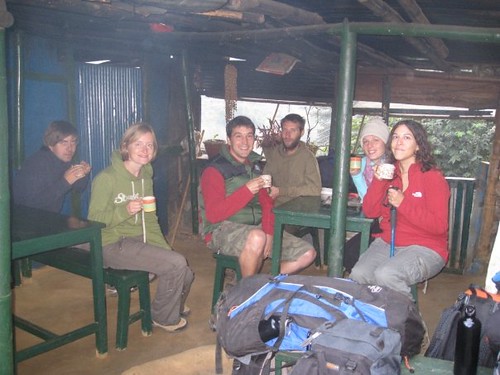 The day before I had emailed the embassy (and my mum) to let them know where we were all off to. Sending that kind of email makes you feel a bit nervous. As does having no guide. We didn’t need one, so says everyone who knows about trekking. The Jomsom trek is apparently so easy that your granny could do it and still get home in time for Countdown. So they say. Who ‘they’ are I have no idea, but they clearly don’t know what I mean by easy. Easy involves sitting. That is why there are easy chairs.

I am not exactly the healthiest mountain goat, as those who know me know. I have rubbish lungs (the Bleomycin that was part of my chemo didn’t help with that. It’s the one Lance Armstrong refused to take when he was battling his cancer, because the lung damage it might have caused would hamper his Tour de France winning after he’d kicked the cancer’s heinie (at the time I had no Tour de France winning plans)), and rubbish legs (though they do enjoy wearing stripy knee socks). Stairs are not my friend. Hills are ok as long as I am just watching Maria sing about them being alive with the sound of music. Yet there I was about to attempt to trek to 3660 metres. I was clearly a bit mad.

Trekking isn’t mountain climbing, and it isn’t hiking. Apparently it is “a mode of travel without using any vehicles at all” where you set out to reach a destination, rather than just to walk (which would be hiking). Nope, I don’t get it either. From my point of view trekking is walking up a mountain with everything you need on your back (or in my case a bit on my back, and most on M’s back. My lovely sherpa).

Our path was clearly marked, and there were tiny villages all over the place (tiny villages meaning five or six buildings and some goats). There was going to be a lot of going up, and a lot of going down. It would be cold. We would spend our nights in ‘Teahouses’, very basic guesthouses run by mountain dwellers, where you were better off drinking tea than water as it was cheaper and less likely to give you mountain lurgee.

So we began by strolling (read that as sliding and swearing) down muddy mountain stairs to Nayapul’s little centre. A trailside scattering of houses, the occassional shop (one waved yarn at me, which I took to be a good sign), and a restaurant where we ate boiled egg and Nepali ‘toast’ (bread that has been briefly shown to a dim candle).

Then, after signing in with official-looking folks (who told us that over 650 people from the UK had done the Jomsom trek that month. The closest nation behind that was the Dutch at just under 250. Either we’re hard core or they are all off doing the Everest Trek and leaving us the easy one), crossing a suspension bridge (Indiana Jones eat your heart out. Kalimarrrr!), crossing Naya Pul’s new bridge,

and taking in the rules and regulations (“Don’t point your feet at people” and “Save caresses for private moments” being my two favourites), we were off. Trekking. Hurrah!

Trekking day one sights and stuff:

Two relaxed mountain ladies having a little Stitch and Bitch on the steps of their house. One of them doing an impressive bit of cable in a fine blue yarn. I shall eternally regret being too shy to ask for a photo…

The softly clanging bells of lines of laden donkeys picking their way along the trail. Warning you to get the hell out of the way before they knocked you gently down the hill below. Stay on the uphill side of donkeys, future trekkers.

A sigh from my lungs at every rest stop. The trail has shelved seats of flat rock all over the place for you to rest your weary bones. Some of them have chickens on them.

Being joined by a furry thick-legged mountain dog who calmly kept pace with us, then hid behind our legs when larger Nepali mountain mastiff dogs appeared in a gang and growled at him.

A fine cup of tea and a plate of veg egg noodles for lunch. Lord did I need it.

A fat and jolly Asian man ‘namate’ing us from the back of a labouring donkey, and telling Simon “You’re a lot slimmer than me. I have to get a donkey as I am a fat sh*t.”

An orange seller crocheting a hat by the side of the track. We bought oranges from her and then I stole her soul by means of photography. Mwa ha haaaaa. The oranges were excellent, and dammit so was her hat.

Orange? Hat? Hat for your orange?

The discovery of Beast Legs (©Michael). Warm fleece trousers that are not fashion in any way whatsoever, but are fabulously cosy and the best thing in the world after a day filled with hours of walking when the mountain cold drops on you like an ice ape of doom. “I can’t wait to put my beast legs on.” would become a familiar phrase during the trek.

The views. Whole mountainsides of shelved fields from tip to riverbank, chickens pecking in the honeysuckle, women washing clothes on the banks of the freezing river or plaiting each other’s hair on stone doorsteps of blue wooden houses, clouds misting the top of mountains, too-high haystacks teetering in yellowing fields, sweetcorn hung to dry from ceilings like funkily dressed bats.

Would ya look at that

At the end of the day we walked (I sort of stumbled gratefully) into Tikhedhunga, and our first night in a Teahouse. We ate dal bhat (rice, lentils, curry), and apple pie with ‘yellow gravy’, drank more tea, played cards, and dropped exhausted into our sleeping bags.

I was rather surprised at my day. It had been tough legs and lungswise. But not all that tough. Here I was at 1540 metres. Little bit sore. Little bit tired. Here though. Maybe it really was as easy as ‘they’ said.