Kathmandu. I have always wanted to come to Kathmandu, though I didn’t really know anything about it. The name alone convinced me it was somewhere I needed to see. What did this Cat Man look like? What was it that he did? Was he married to Dogwomandon’t? Hmm?

It was cold in Kathmandu. Nepal’s capital city sits at 1400 metres above sea level, and at this time of year the people who live here are all hats and scarves. Shops sell cosy down jackets and thick woolly socks. The nights, in unheated budget hotel rooms, have you waking up with frozen nosetip above the blankets. Brrrrr.

Kathmandu ended up a bit of a blur to me. But here are some of my Kathmandu happenings:

Stopping in the middle of the busy city to watch a passing parade, and seeing The Kumari Devi, a living goddess in Hinduism and Buddhism. The goddess is a pre-pubescent girl who has been chosen by a ritual of tests checking her time and day of birth, colour of eyes, shape of teeth, sound of voice and other things. On the day of her first period the girl is no longer a goddess and they move onto finding the next one. It is apparently unlucky to marry an ex-goddess.

The girl I saw couldn’t have been more than four years old. She was blinking quietly at the crowd and noise around her, her lips pressed together in a tired line, her eyes taking in all the colour and chaos like she’d seen it all before. She was dressed in a red velvet gold patterned suit, and had a third eye painted on her forehead. She was being carried by a richly dressed woman who held a gold umbrella over them both as they walked amongst the other people in the parade. (I didn’t get a photo of her. It felt a bit wrong to take one.)

Tail end of the parade

I know that this is part of their culture. And in Nepal, as in India, religion is so overwhelmingly important that it flows over everything, appearing in the most unexpected places. Yet I couldn’t help but be sad for the tiny deity. Knowing her life was not her own. She was so small in amongst the crowd.

Durbar Square, a jumble of palaces, temples, courtyards, and people. Taxis rev their engines in the centre of it waiting for fares, kids play hackey sack, people sell everything from prayer wheels to curved knives to gold embroidered silk purses to cheap plastic pairs of painted chopsticks, and others carry loads on their backs that are bigger than they are. 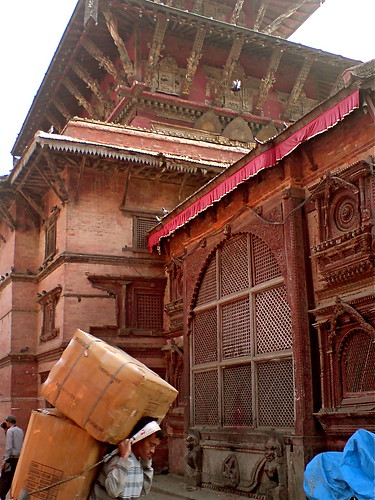 Pigeons galore (why are there always pigeons in squares?) flap for the skies in grubby grey waves, and the smell of spicy snacks drifts from carts being pushed to and fro.

Extra raw chilli and onion on my dried peas, please

Along one wall is the Royal Palace, now behind barbed wire and guarded by soldiers, while on the steps in front of and around the other ornate buildings sit people relaxing in the sun, texting on their mobile phones, chatting away their afternoons, buying, selling, watching people watching other people.

Hanging with the lions

Bikes and cycle rickshaws sail through with their bells ringing people out of their paths. People come and go from garishly painted altars cratered with candle wax, while stone gods and wooden dragons gaze down on it all from their rooftop perches.

We passed down a whole street of butcher shops. Skinned and naked carcasses of lambs and chickens lie raw on streetside counters, watching you pass with sightless eyeballs.

I spied my first ever Space Invader mosaic outside of London. They’re all over the place, but this is the first one I have seen with my own two peepers on foreign soil.

They came from outer space

Wandering through the back streets we came across a Bhuddist stupa, its prayer flags flapping in the afternoon sun.

We spent some time speaking to a travel agency about travelling on to Tibet. Halfway through the conversation he said to us “Where are you from?”. We told him we were from England, and he narrowed his eyes at me in disbelief. So I explained that I was half Mauritian, which made much more sense to him.

“You have the black eyes. The eyes of Arabia.” He said, moving his fingers around his own eyes to make a shape in a rather dramatic manner, “These eyes are considered very beautiful.” He went on. I stammered an unintelligible response. Searching the room for his white stick and dog. There was a short uncomfortable silence.

“Your eyes are blue.” He said to M. Then “I am sorry. I don’t know if this is an impolite thing to say.” We assured him it wasn’t at all. Bless him.

What I should have said was, in the words of Mark Twain, “I have been complimented many times and they always embarrass me; I always feel that they have not said enough.” in some kind of film noir manner. Before dropping a cigarette on the floor, crushing it out with my high-heeled shoe, donning my fur stole, and walking out in a sassy manner.

The streets of Kathmandu are as full of life as India was. Not here the calm and easy pace we have seen in Nepal so far. There are so many people, and they are doing so much. Life, love, religion, eduction, celebration, and the stop-start familiar wanderings of camera-toting tourists mixed into it all. It is lovely to be here in the heart of another strange city. I feel I could go on travelling forever.

Kathmandu - watch you don't step in any

But sadly for me it wasn’t to be.

We were worn down from trekking and jungle safari. Three months of cold showers, pillows apparently made from clay, grubby mattresses that made you mysteriously itch, clothes that came back from the laundry dirtier than they went in, five-hour bus seats that bruised you to your very soul, brushing your teeth with bottled water in fear that you would forget and use the tap, and food you had to more than occasionally pick hair out of.

It turned out that three months away from home and weeks before Christmas were too much for a homesick M.

The feathered ghost of Christmas future

So, instead of booking our train into the Tibetan mountains, I found myself sadly coming home. Home to my cats, my yarn stash, my family, my friends, and the rainy grey skies of my lovely London, where my eyes are not considered quite as beautiful, and where my wandering heart will long for the uncomfortable eight-hour bus rides and nights plagued by giant blood-hungry mosquitoes.

Hanging up your backpack, for someone whose heart eternally longs for the road, is like leaving a best friend. Yes, we had our bad times, but they were far outweighed by how heart-stoppingly amazing the great times were.  I will miss my best friend.

But I hope that London, my soulmate of a city, will give me enough yarns to help me spin me some travel tales closer to home. And I’ll always be planning the next trip, and the one after that.

For now, I remain interrupted. 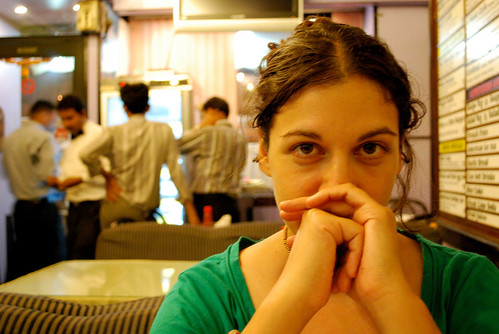