Chitwan National Park: “If we see a tiger, we are quiet and meet him eye to eye.”

Posted by Deadly Knitshade on Dec 8, 2008 in Animals, Nepal, Once in a Lifetime Stuff, Purl Interrupted, Travel, Video | 6 Comments

“If the rhino runs, we must run in a zig zag or climb a tree.”

We shuffled our feet nervously in the leaves on the jungle floor.

“If we see a bear then do not run. You run, bear run faster. Do not climb. You climb, bear climb. If bear come we stand in a group and we make noise. Stick,” our guide waves his thick face-high walking stick, “is for bear.”

“If we see tiger we are quiet and meet him eye to eye. Do not run.”

It was far too early in the morning and we were stood in the middle of Chitwan National Park, having floated almost serenely across the misty jungle river in a long boat. ‘We’ refers to four of us, me, M, and Simon and Kate (an infectiously happy couple from North Wales), and our two jungle guides.

Our main guide was Chitra. The man who would keep us from being killed by wild beasts during our safari. He was a small and confident chap with an easy moustached smile, and an obvious delight in seeking out the wildlife that roamed the park he took pale and nervous tourists into daily. 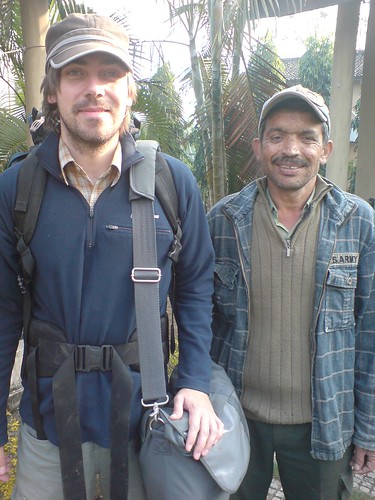 The evening before he had taken us around the park border and village. He’d pointed out walls made from elephant grass that were decorated in tiny paint-smear handprints.

He took us to the elephant stables, where the huge animals managed to look humongous and harmless in one go.

Elephants: a bit rubbish at hide and seek

He walked us along the banks of the river, where village women dunked their laundry in the brown water and laughed in the face of the marsh mugger crocodiles that shared their washbasin. He nodded a cheerful hello to the armed uniformed guards that stood at the park gates, and he left us to enjoy sunset over the lazily flowing jungle water.

The canoe we’d stepped carefully into, to take us into the park, was just wide enough to sit in and rocked from side to side in a stomach-clenching way. Still once you got over fear of being rolled into the murky who-knows-what-infested waters it was an amazing place to be.

The river was alive with jungle birdlife, in a way that would make Bill Oddie spontaneously combust with feathered overload. Most impressive was the flashing blue and orange of the kingfisher (who was also available in black and white). He hung over the water, wings in a frantic flutter, then dropped in the murky depths for a fish dinner.

The park's birdchart - Bill Oddie would be proud

The river also swarmed with sand martins. Tiny forked-tail darts who swooped and swung at flies, and shot torpedo-style into their burrowlike nests in the dry earth walls of the riverbank.

My favourites were the ruddy shelducks. Squatting in webbed-foot pairs puffing out their feathers in the morning chill. Ruddy shelducks mate for life, and if one utters its last quack, we were told as we floated by, then the other will follow within days. Ducks, it’s only fair to eat them in pairs (pass the pancakes and plum sauce, will you?).

Back to the beasts.

Landing mid-jungle my longing to see the chunky wildlife of my dreams dropped away a bit. It’s one thing to observe them from the relative safety of a jeep, but another entirely to be standing in front of them on your own not-so-fleet feet. Poised to run in a zig zag, shinny up a tree, scream your head off, or stare out a wild animal. In Kipling’s Jungle Book Mowgli could stare out even Shere Kahn, but, though I have given some filthy looks in my time, I wasn’t sure my eyeballs were up to Mowgli’s standard.

All that stood between us and the wild were two men. Two men in flip flops.

And so we walked. Past leaves hanging heavy with red cotton bugs (not to be confused with cotton buds and used to clean your ears). 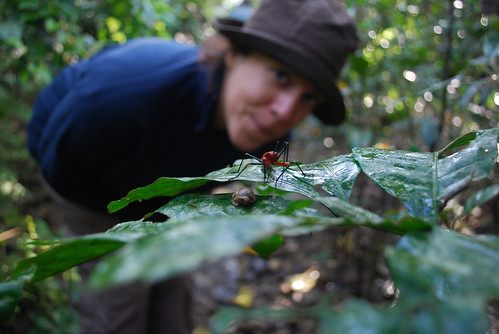 Don't put them in your ears

Past foliage damply housing leeches all too eager to drop onto your bare skin and tuck in. And past crumbling piles of rhino dung, big enough to build a small (smelly) armchair out of.

I am sad to say that our hours of walking were beast free. We saw rhino footprints, heavy and two-toed in the dust. We saw deep gouged holes where sloth bears had dug down to the sweet roots of trees. We occasionally saw deer poo. 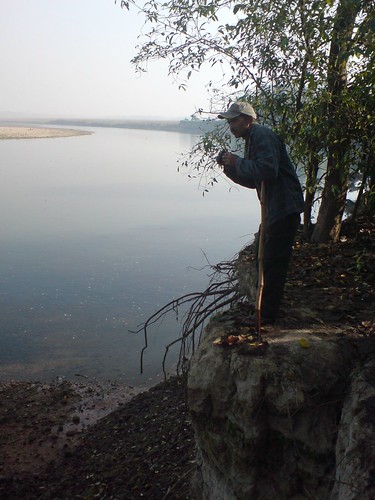 In the middle of the walk we climbed up a wooden viewing platform. Grassland stretched out on one side in a dry yellow carpet, on the other trees stuck out of a thick mat of jungle leaves. The jungle perfume rose with the sun, warm, earthy, and green.

Chitra told us that three years ago we would have seen ten to twelve rhinos from up there. Today, due to the troubles the country had been through with its change in government when there was no one there to warn off the poachers, there were hardly any rhinos to be seen. A very sad tale. 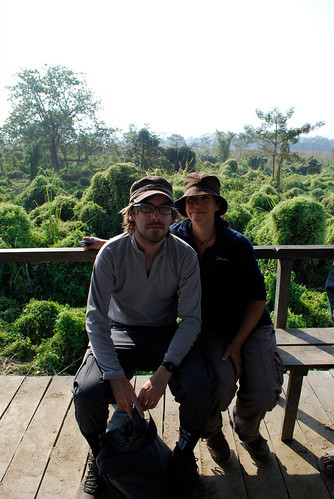 Sadly not being eaten by tigers

On our way back to park a few curious monkeys dropped in to peer at us from between the leaves. In the distance a monkey war was kicking off to the screams and chatterings of its soldiers.

We walked back for lunch, and ‘elephant bathing’. I am not going to say much about Chitwan National Park elephant bathing, except that we didn’t do it. We didn’t because after seeing the elephant’s mahouts clout them on the head so hard their ears waved out in alarm, we thought it better not to encourage them. If you come here then maybe go down the river to see the elephants bathing without the tourists on their backs. It’s a lot more fun for the elephants.

I was a bit disheartened by lack of beasts by this point. Climbing into the jeep for our elephant safari I have to say I wasn’t expecting much. I had disappointingly not been killed by anything on four legs. Not even a nibble.

I clearly underestimated the power of a wandering jungle tusker.

Four of us crammed onto the small cushioned platform on the broad wire-haired back of our trusty steed, and with a prod of the stick we were lumbering off in search of smaller beasts. 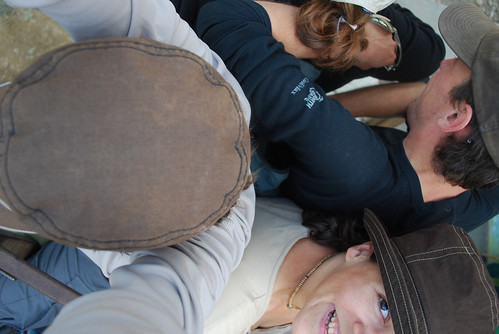 Four people, one elephant, not much room to sit

An elephant crunching through the jungle is something of an everyday thing to most jungle beasts it seems. It wasn’t long till our mahout breathed “Rhino!” and steered our four-legged friend towards a patch of bushes.

Snoozing peacefully in their leafy nest lay a baby rhino and his somewhat more scary mother. Both creatures in their triceratops-like plates of grey armour, flies buzzing and landing on them as they snored on. Rhino Junior flicked his ears as we swayed closer, then sleepily blinked his shiny eye and rolled to his chunky feet to peer at us sideways. Seconds later and mum was up too, turning her great grey rear to us, after deciding we were clearly no threat. Clicking cameras and excited whispers from atop the elephant didn’t bother them at all. 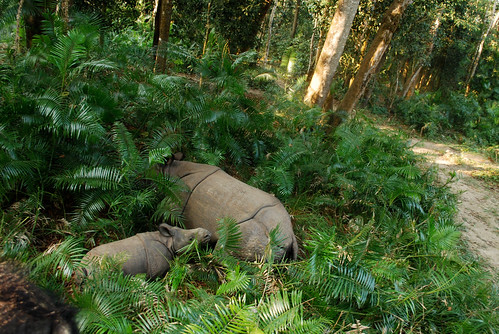 What was that noise? 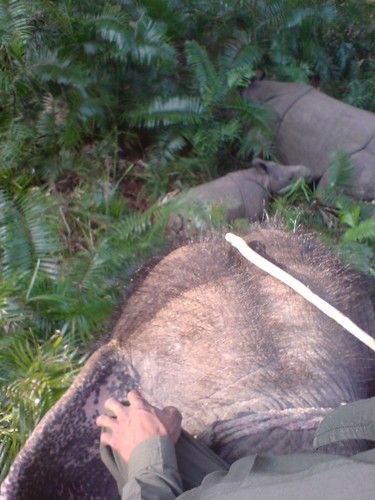 Go back to sleep. It's only an elephant.

We spied large-eared staring deer whose eartips would have twitched above my head had we been on foot, and flighty spotted deer who gave us a glance and flickered into the undergrowth. Haughty high-horned stags stayed just long enough to pose for photos. 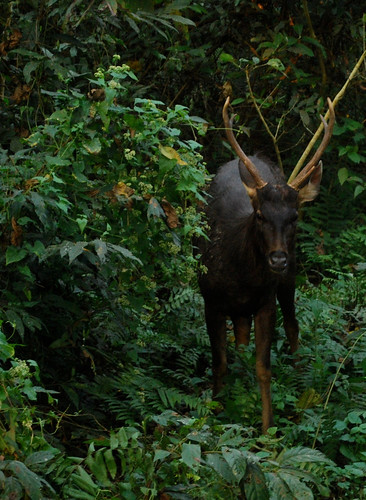 I think he knows we're here

At the riverside we saw a large man-eating marsh mugger sunning himself on a mud bank. A streak of pale green scariness pretending to be a not-hungry-at-all log.

The elephant waded calmly into the croc-infested river, stopping to fill his trunk and squirt a refreshing drink into his mouth.

Other elephant safari-goers crossed our path from time to time, and we all beamed at each other in animal joy (except for these two who clearly could have been happier. Possible elephant sea sickness?).

More rhino greeted us on the opposite bank. Chewing at grass and leaves, and ignoring us all the while. Seeing a rhino from above is a very odd thing. They look incredibly alien and yet a bit cattley at the same time. Like armoured cows. 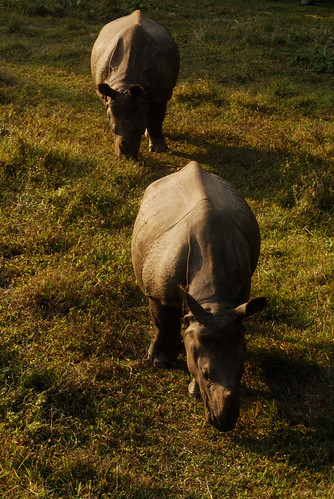 Not armoured cows but rhincerouseseses

The elephant apparently doesn’t need a path through the jungle, and towards the end took to rushing randomly into the trees while branches and vines smacked us in the face and got caught in our hair. At one point we emerged from some particularly dense trees and I looked down to find an enormous hairy spider on my knee. I calmly flicked it off with my trusty camera phone before allowing myself a shudder of horror.

At the end of the trip we climbed down and thanked our elephant for his jungle tour. 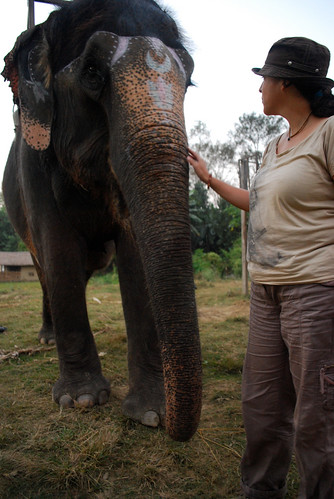 A world full of chunky beasts is so much better than one without. The only poaching I condone is that of eggs. And only if the yolk are just the right runny.

If only wolves would adopt me...