Posted by Deadly Knitshade on Dec 5, 2008 in Knitting, Nepal, Once in a Lifetime Stuff, People, Purl Interrupted, Travel, Trekking | 4 Comments

Brushing your teeth with a quietly buzzing electric toothbrush while standing outside at a water tap with a view of Annapurna One, and being observed by several curious water buffalo in the field next door, is probably one of those moments where you feel like the luckiest person on earth. So there’d be stairs today, more stairs. I could take it. Look where I was.

My calf muscles, by this point, seemed rather angry at me. No amount of stretching seemed to calm their ire. I soothingly promised them much sitting down later, maybe some tiger balm, and if they were very good then a dip in Tatopani’s hot springs. They grudging relented, but not without some muttering I can tell you. 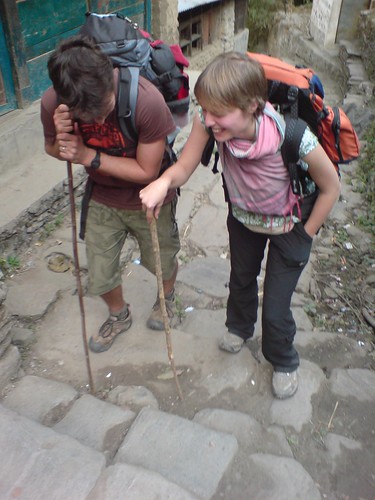 Chris and Anna argue with their calf muscles

Today was to be our last walking day. M and I, and my legs and lungs and his knee, had decided that the heights of Poon Hill and the lows of the deepest valley in the world (the Kali Gandaki gorge) were enough. Things would get colder and less oxygenny further on and, though it was sad to be ending the trek, we weren’t going to gamble. The yak steak at Jomsom would just have to wait. Thus making a yak somewhere very happy too.

So downstairs we went, our bellies full of chapatis with peanut butter spread on them (they had run out of bread for toast and they don’t appear to have any Tesco Metros in the area). Onwards to Tatopani (literally meaning Hot Water) and the steamy hot springs of my dreams.

The path. The views. The moutain air. I just make you sick, don’t I?

A knitting lady I accosted outside of the loos at one of our stops, who smiled shyly when I complimented her on her stitching prowess and knit dilgently on while I took a snap of her (I asked first. She thought I was a bit odd).

The way my stomach lurched as we peered gingerly down the steepest flight of stairs to the sweeping green of the valley floor below.

Finally getting the butterfly I had been spinning round and round to photograph to strike a pose. Wing-ed fiend. 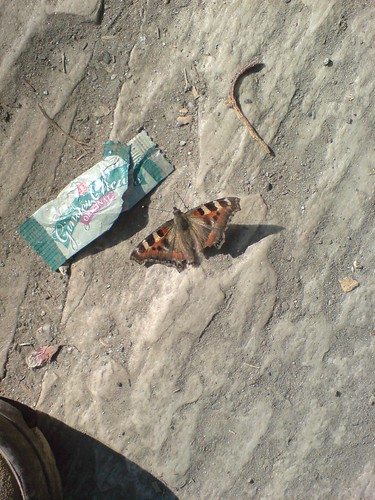 A man carrying a cage of very sad chickens on his back. Not a good sight but a memorable one. You could smell their sorrow as he walked by.

A bunch-haired girl who kept demanding we buy her oranges, and told us her age was “Ten o’clock.”

Tiny ladies carrying the components of an entire house on their backs. Yes, backpack-carrying shame for us all.

The very last awesomely precarious suspension bridge, which suddenly became buckled and rockslid at the opposite end causing most of us to suddenly do speed-up-before-it-breaks-into-tiny-bits-and-pitches-me-into-the-river walk while crossing it.

Unafraid. Utterly unafraid I tell you.

Other end. Now okay to admit I was afraid. Just a bit.

Our first dust-puffed steps onto the newly made road at Tatopani. Happy to have made it, but sad to be leaving despite my whiny aching legs.

Ah hot springs. They’re hot. They make you springy again. What’s not to love? Tatopani’s hot springs were less impressive than your mind makes up. In Iceland we’d wallowed in rock pools of stream and steam under snow and stars. Here we found a small stone square of slightly murky water, vaguely steaming in the afternoon sun and full of Nepali men in greying y-fronts. But hey, when you’ve spent the last four days washing with a jug and a bucket of hot water in a concrete room with goats peering nosily into the window, a nice hot bath sounds like heaven whatever might be lurking in the water.

How green was my valley? Pretty damned green really.

M and I padded down to the poolside and donned our wallowing gear. I ended up putting on almost more clothes than I took off. The two Nepalese ladies in the pool were both covered to the knees, and when in Rome don’t get your haunches out if the locals don’t, as the saying probably doesn’t go.

The water was toasty. Slightly filthy, but toasty. The nearer you got to the corner where the springs were fed into the pool, the toastier it got. I braved it for a good long while, I do like to lobster, but eventually even I found it too much. My shoulders began to take on the appearance of gammon. I can take a hint.

It was a fascinating splashy place to be. At the run off pipe people happily soap themselves down and wash off the mountain grime. Probably the only warm wash they get without having to go to the trouble of getting the wood to heat the fire etc etc

Young men stood about be-panted, pretending not to watch young women who pretended not to watch them back. The ladies took down their hair from the usual single plait, and it fell in shimmering dark rivers impressively almost to their knees in some cases. I had hair envy in the extreme, even though I would have no idea what to do with so much headfur.

Small boys and girls also tumbled about in the greyish water. One of the boys waved a mangled toy gun and a soggy packet of chilli paste (fake blood). Occasionally he shot at one of us. The boys duly rolling in the water in impressive English villain death throes.

It was here amongst the steam and the soggy chilli paste that we met a wise man. A walnut of a man whose eyes looked authoritatively off in two different directions. He told us his name. It was a soaring dipping Nepali name that I would never remember. He smiled as if he knew this, and added “Each part means something. My name is Large Joyous Wisdom.” I was far too impressed by it to forget that. It turned out that for 48 years he was the Head of Agriculture for the whole of Nepal. He introduced apples, peas (yuk), potatoes, and other wonders to the whole country.

He’d been to England, and all over Europe. His proudest memory was attending the 14th International Potato Conference in Holland, where he climbed their highest mountain. “Three hundred and thirty…METRES!” he told us, slapping the water in his mirth.

He also said that while he was in London he has spent every weekend exploring. He’s often ask directions, and the people of London would say “Not now! Don’t bother me. I’m too busy!”. “Here in Nepal,” he went on, “we have time.” before smiling proudly and looking around at the mountains above.

It was a fascinating place to be. The heart of surrounding communities where people gathered to get clean and pass on news. Large Joyous Wisdom seemed much happier to be amongst his mountains than anywhere else. I had to agree.

Dinner was a celebratory steak, a glass of Chhaang (like alcoholic cat’s pee), and a few well-earned beers. Followed by a drunken gathering to look at the frankly humongous spider living in Claire and Simon’s bathroom, which was clearly just waiting till they were foolish enough to fall asleep before it crawled into their ears to lay many humoungous baby spider eggs which would hatch out and feast on their sweet sweet brains.

You can enlarge this picture by clicking on it. But why would you want to? I mean really.

Sleep was very easy to come by for a girl full of still-mooing steak, ache-legged, and Chhaang-soaked. I checked for brain-eating spiders before sleep. Just in case.