“A hearty welcome” softly smiled the sign welcoming us to Pokhara, a lakeside town at the foot of the Himalayan Annapurna range. 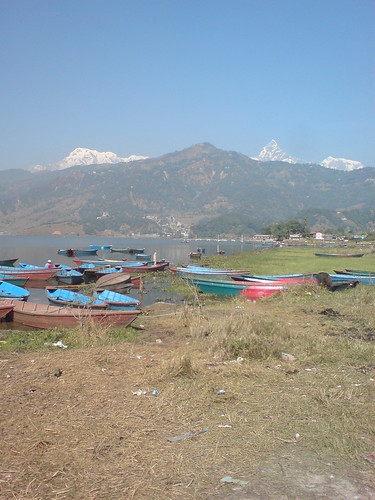 We’d been on the bus from the border for about five hours after spending the night in Bhairahawa, a smudge of a place with mosquitos the size of your fist that had me involved in somewhat of a bathroom-flipflop massacre before I gave up and retreated to the safety of my mozzie net.

Nepal won my heart immediately by having pavements, neat little front gardens, and more bobblehats than you can shake a pompom at. It doesn’t take much. Having spent the last eight weeks narrowly avoiding cowpats, ankletwisting potholes, and crazed autorickshaw drivers in the Indian heat, it was a bit of a shock to be pootling down actual pavements. I could look up. I didn’t have to watch out for vengeful cows (there are cows here but they don’t seem to want my hide). And it was a bit chilly. I do like it to be chilly.

Nepal is all about mountains. Which is a very lovely thing to be all about. So that even while you are hoping your teeth won’t rattle out of your mouth on the juddery mountain roads, or the bus won’t leap gracefully into the gaping river ravine below, or the collection of wrapped up people sitting on the roof won’t go down your rucksack and find pairs of your pants, you are still going “Ooooooo. Would you just look at that view!” Everywhere you look is smack-in-the-face gorgeous.

In Nepal you trek. Apparently. I wasn’t so sure. Our first evening I fell off the veg wagon in spectacular style (“I’ll have the steak, please. Rare.”), drank red wine (at last), and we (M and our fellow border-crossing Brits) talked about trekking. Now really I liked the idea of being thousands of metres up, but was I up to it? I don’t even do stairs…

Two days later and I am the proud owner of one natty pair of fleece trousers, one fleece, a windproof jacket, a cosy down sleeping bag that looks like gloworm, a red silk sleeping bag liner (combined with the sleeping bag it has a sort of Superman crashing on earth in kryptonite pod thing going on), lots of interesting socks, a waterbottle, a headtorch that had some sort of rave party setting (man, I am so cool), an adjustable walking stick with a compass in the top (which I christened Rum Doodle), an obligatory woolly hat with dangly bits on the earflaps (it’s the law out here to have one), and one shiny trekking pass that allowed me to journey to places where people get altitude sickness and frostbite and are proud of it. Blimey… 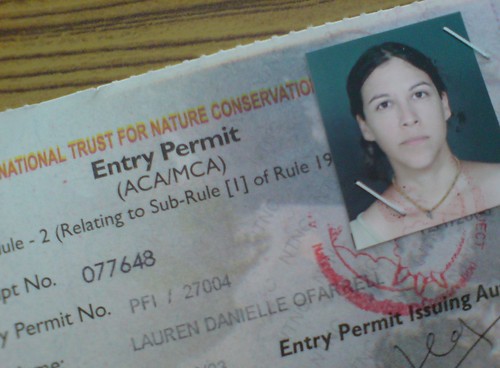