We broke for the Indian border on the 28th of December with a feeling of relief, sadness, and excitement to see new places and get away from ones that suddenly didn’t feel so safe. I spent the first half of our train journey, to Gorkphur and onwards to Sunali the other side of the Nepal border, with my head buried in a newspaper and my stomach turning cold at what I read.

In the late hours of the 26th gunmen opened fire on Mumbai’s CST station, killing 78 people. Two of them were children, one of them was a British backpacker. The paper shows a photograph of an empty station waiting area, the floor bloodstained and scattered with items left behind. It is the same station waiting area M and I stood in two months ago, giggling as M used my head as a tripod to steady the camera for the ultimate lens-open-for-ages photo.

The firing began at Leopold’s Cafe, the place where I drank my very first masala chai and sat thinking to myself “I’m in India’ at the very start of our trip.

The usual debates were running through the printed and televised news of who was responsible. The death toll rose as we got closer to the border until it was nearing 150, with nearly 300 injured. The roof of the Taj Palace Hotel still smoked in television footage, and terrorists were still to be caught.

I am sure there have always been terrorists. I was evactuated from London underground stations in the 90s enough times to remember the bomb threats at home. I’ve grown up aware of car bombings in places with unpronoucable names, and fuzzy kidnap victim videos wrenching hearts on the 10 o’clock news. It’s a scary world sometimes, with scary people in it. But we seem to absorb the fear and go on. It’s the only way to win.

Two-months in India us

I mention the station and Leopold’s not to be all me me me or to scare those at home who were thinking of me (love you guys), but to put it into perspective for myself. In those places I stood or sat and drank tea I was happily unaware of the big bad things in those moments. Which is how it should be.

I don’t have a solution for the world. My thought every time is a simple “Why can’t we just get along?”. Where anger springs up (and out in India anger and honour seem mixed up in each other and hard to let go) I  hear Ghandi say “An eye for an eye leaves us all blind.”

My only solution is to survive and to live my life deliberately. Not to run home to cups of tea and welcome home hugs with fear behind me. To get to somewhere safe and to carry on despite what has happened because fear shouldn’t stop us doing what we should be doing.

So M and I walked from India into Nepal three days ago.

Into green and clean and mountainous Nepal. 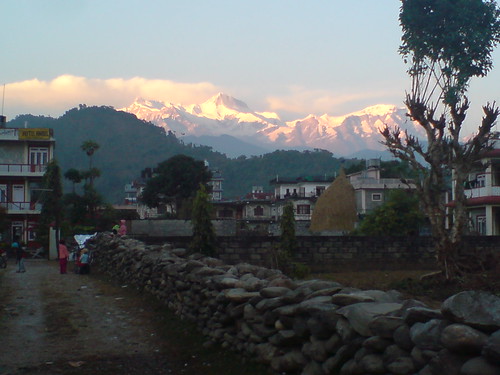 Nepal is rather fabulous

Today we are off into the mountains for a 14-day trek with rather a lot of warm clothing, two sleeping bags filled with duck feathers, four other Brits, bellies full of buffalo steak, and a clear stand that life is about living. I hope to have a fine beard when I return…