Free pattern: BBC Scarfgate or Knitting the Scarf of Doom

Knitting has done a lot of things for me. It’s actually crashed through my life like a yarn-covered Godzilla, roaring fluffy flames at passers by as it goes. It’s been a wild and woolly ride so far. If you’re unclear on the rambling story of how knitting changed my life then I tell the whole tale here. So I’m not going to repeat it.

What I will do is tell the tale of ‘BBC Scarfgate’ or ‘Knitting the Scarf of Doom’. Are you sitting (and knitting) comfortably? Then I’ll begin…

How the scarf began…

Once upon a time there was a blue-haired knitter who was asked to go on BBC News to talk about knitting. EEK! She agreed to the adventure because she loves her woolly craft and is always up for encouraging others to dive into the world of sticks and string.

Have pigeon pocket, will travel

She was also asked to bring along some yarn and needles and knit a scarf live on TV. She was told that scarf would need to be big, bright and really rather funky. Alas the shops were already shut. What to do?!?!

Lucky for the TV people the knitter had more bright and funky yarn than was healthy for any individual, and it was right at her finger tips. She crept to her radioactive yarn stash and chose her brightest, most eye-popping yarn. There she also found the largest needles she had (sadly her very larger needles seemed to have lost half of the set. She suspected it had been eaten by her giant knitted squid).

And so she went off to bed. The next morning a carriage would arrive at 5am to whisk her to the fabled BBC Television Centre.

Morning arrived and the knitter rolled sleepily from her bed. She wrapped herself in her Stitch London Tube Scarf, tucked Cooey the Pigeon in its pocket, grabbed her bag of woolly wonder and set off for the BBC. It was freezing cold and very dark, but she had her knitted pigeon for courage.

The morning whirled by like a Tasmanian Devil in a blender. The knitter hung out with several lovely people (including Aneeta Patel from Knitting SOS and Gerard Alt from I Knit), chatted vintage knits (which she knows very little about except they’re fabulous) with the make up lady (who had brought in a pattern specially to ask advise on a particularly pesky stitch), drank tea, and knit, knit, knit.

She appeared in front of the cameras, with knitted pigeon, four times.

Each time she stitched away as she answered questions, tried not to look at the camera with ‘rabbit in car headlights’ eyes, and talked about the woolly world of wonder she was a part of.

Cooey the Pigeon took it all in her stride. The camera, apparently, loves her.

Cooey relaxes in the Green Room, which was clearly red

Throughout the morning, between tea, porridge, make up, handshakes with people who were experts on spitting in public, finance, weather and current affairs, the scarf grew and grew. Each time it appeared on screen it waved its crazy woolly self and attempted to look as bright and easy as possible.

Hullo world! I'm the easiest scarf to make ever. EVER!

It was quite a sweet scarf, if a little dopey. After all it was barely cast on before it was on live TV. 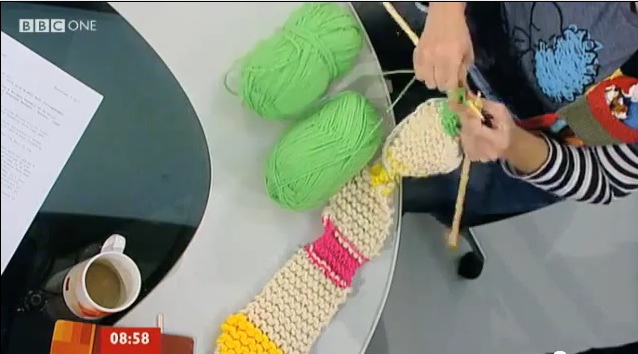 At last it was all over. The knitter cast the scarf off and it was whisked away to be wrangled over by the presenter it was meant for (who professed her love for its bright colours from her distant knitting past) and the producer (who liked it so much she actually cursed out loud when she found out it wasn’t meant for her).

All this was pretty impressive for a scarf barely a few hours old. It hung limply around the neck of the ‘meet and greet’ person, waving goodbye and looking a little lost. But I’m confident it went to a good home. So we don’t need to worry about it being eaten by big bad wolves or turned into a handsome scarf by a witch.

Cooey models the scarf. Not suspecting it is the Scarf of Doom.

On the way out they did what every self-respecting geek would do on a visit to the BBC. They pretended that Cooey was the new Dr Who.

When Cooey and the knitter found their way sleepily home, they were welcomed by a HUGE torrent of the loveliest words ever. The words sloshed through the internet and drowned them both in congratulations and well dones and ‘Yay! Knitting!’s. Yarn shops tweeted about herds of new learners, old knitters tweeted about picking up their needles, and people who were always knitting raised their sticks and string to a job well done.

And they all lived happily ever after.

Well, almost all of them… 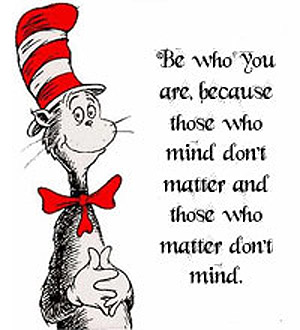 How the scarf became The Scarf of Doom…

Out of the shadows appeared the most rare breed of knitter in the world of craft, the frozen-hearted ‘yarn haterz’. AAAAIIIIEEEE!!!

In a few chilly places, on that thing they call the internet, there are bleating herds of people who have poured scorn on the knitter, the pigeon and the dopey scarf. They used their nastiness to turn a simple scarf into ‘The Scarf of Doom’: “truly hideous”, “enough to put anyone off knitting for life” and “the fugliest scarf ever”.

Now, disliking the scarf wasn’t so bad. Everyone likes different things and if we all liked the same things what a dull world this would be. But rather than just disliking it these folks were utterly disgusted and horrified. And it didn’t stop at the poor old scarf.

In the oddest turn of craft events since the invention of lube for jelly yarn, the knitter’s mental health, knitting credentials, needle holding, appearance, choice of wardrobe, ability to knit, and intelligence have been questioned and poked fun at by total strangers.

These ‘yarn haterz’ didn’t just lurk in one place either. Oh no, several dark online pockets where unhappy people go to hide piped up. They crouched behind their avatars, so they don’t have to look you in the eye, snickering into their hands and thinking they can be as impolite, prejudiced and mean-spirited as they choose. 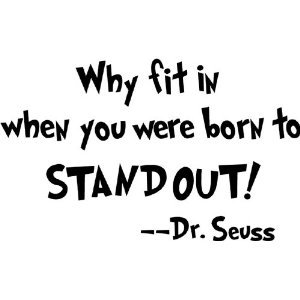 Not one of them stopped to put themselves into the knitter’s shoes and think about what they would have done. They just climbed upon their high horses, laughed themselves stupid and poked away with their pointy words, without a care. Dear oh dear.

Lucky for me their words were muffled almost entirely by the avalanche of supporters who piled into these dark places to shake their heads and pass around the woolly hugs. It proved the fact that I know well, which is that 99.9% of knitters are fantastic human beings. Which makes the other 0.1% a knot of sad and rather soulless stitchers.

I will always stand by this:

It doesn’t matter how you knit, or what you knit, or where you knit it. You’re fantabulous because you are a creator. Be proud of everything you knit, because, no matter what you end up with, the fact is that you created it with your own two hands and it’s bloody marvellous that you did.

How to deal with the ‘yarn haterz’…

There is only one way to really reply to people like that. And here it is in pattern form:

Look what I made and you can make too!

Pass the pattern on to knitters you think might need a boost, or a laugh, or a little bit of encouragement to leave the ‘yarn haterz’ herd and stand with the happier carefree knitters.

[box] This pattern is dedicated to all the lovely knitters and non-knitters who sent such nice words of support when ‘Scarfgate’ kicked off. You’re the best advert for knitting ever. I am proud to stand amongst you and pass round virtual cake. [/box]

To the ‘yarn haterz’ I say, may you find your own happiness, before you get so tangled you turn into yarn ogres and eat each other.

My knitted pigeon, Scarf of Doom and I have our happiness and we don’t need to bring anyone else down to have it. And we’ll keep on sharing it too. So there.

And in case you missed it here’s a peek at one of the ‘Scarfgate’ moments on BBC News:

Huge woolly hugs to Tara (@mordantcurious on Twitter) and Claire (@claireej on Twitter) for proofreading my pattern after midnight on a Thursday when they should have been sleeping. You ladies rock. And to Owen, who helped Aneeta put the video up. Yay!