Day 21 on the Trafalgar Square Roundabout and Muncher the Knitted BT ArtBox monster continues his sojourn. So how’s the handmade monster holding up? Surprising well considering this has been the wettest British June on record. Yes folks, the wettest June ever recorded. Poor old soggy Muncher.

Muncher suspects there be a storm acomin'...

At the end of June I buggered off to the city that never sleeps to shoot pictures for the upcoming Stitch New York book (more on that very soon. Squeeeee!) and left my Monster to his own devices in London.

While I was away it’s been the world of social media who have helped me keep an eye on my Monster. Twitter has been hilariously protective of him. In fact tweeter @effandineffable has updated me twice a day on weekdays under the #munchermonitor hashtag, and on Instragram he often pops up under the #btartbox tag.

It’s been brilliant seeing how he’s doing through other people’s eyes and I think Muncher has enjoyed it too. He’s made so many friends and hardly eaten anyone at all (and FYI he doesn’t eat kids. Too many small bones). 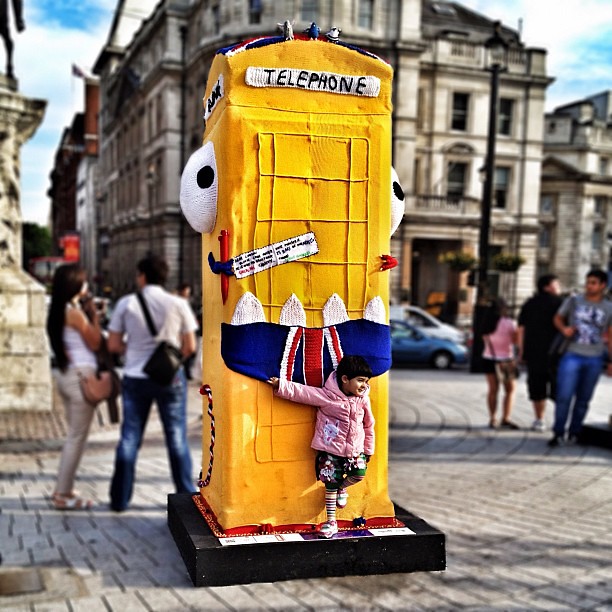 Muncher hangs out with a tiny fan

Sadly some people love Muncher so much they get a little over excited. So far he’s lost one knitting needle, had chocolate milkshake poured down his tail (sticky!), and one loving couple even gave him a graffiti tattoo! The swines!

Yes J + L loved Muncher to the point of putting permanent pen on his silky soft yellow stitched skin! AAAAAAIIIIIIIEEEEEE! No amount of scrubbing and bottles of Vanish would shift it. Dagnammit! So a little temporary creative stitching was called for.

I spent a delightful hour on the roundabout doing a spot of tattoo removal. During which I met a Cooey the Pigeon knitter all the way from Canada and her family who were really pleased to meet me and brought their very own Cooey along, an American lady who loved the Stitch London book and was ever so lovely, and the #MuncherMonitor herself too! So it was actually really rather nice. Thanks J+L!

My temporary repair does indeed look rather like my hero, Mr Wyle E Coyote. I am working on a more spectacular repair to install on Monday when I’ll be on the Roundabout from 7pm for the Meet the Monster event (please come and say hello and listen to me ramble if you’re around!).

Muncher, quite happy with all the attention, remains on the Roundabout until July 16th. Please go and give him a huge hug if you’re in the area. Just watch those teeth. He’s getting very peckish spending all that time in public…