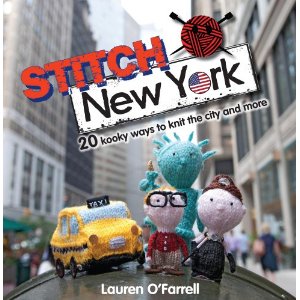 My new book Stitch New York: over 20 kooky ways to knit the city and more is here! Woo hoo!

The second book in the original city knitting series has arrived and it’s turning the city that never sleeps into a woolly wonder.

Stitch New York will take you by the handmade and lead you on a wool-flavoured tour of the city, from money-munching Manhattan to the bohemian beat of the Bronx, in stitched style. You’ll be starstruck meeting Knit New Yorkers, relax with your skinny decaff latte on some HUGE New York eats, and feel all-American gazing at a stitched statue of Little Lady Liberty.

Can’t knit? Fuggedaboudit! We’ll show you how and have you knitting in a New York minute.

So hop in, cast on and lose your heart to the homemade metropolis of Stitch New York. Go on.

Stitch New York is out now and I’ll be posting all kinds of tales about the critters that live between its pages.

[All Stitch New York pics were shot in location in lovely New York City by camera-wielding genius Jack Kirby from Bangwallop with lots of help and some hindrance from the author. Cool, no?]