Cor blimey, guvnor! Would you Adam and Eve it! I’ve only gone and written my first ever knitting pattern book and it’s packed to the rafters with loads of bloomin’ luvly London!

Stitch London the book fluttered into my brain like a manky one-legged Trafalgar Square pigeon when I first found my stitching stride as a London city knitter. It pecked at the juicy bits of purly pattern ideas, it made ‘CooOOoooOoo! CoooOOooOoOoo! noises when I passed a city sight I thought needed knitting, it broke into an ungainly bobbing-headed dance whenever I helped create a new London knitter, and it perched on my undying love for London and puffed up with pride.

Eventually it nested down on the top of my brain, folded its wings delicately in and waited to be released into the wild.

Putting the Pigeon on pages

I had been stitching London ever since I cast on my very first stitches. Stitching around London (purling on public transport); on London (have graffiti knits, will yarnstorm);  in London (organising Stitch Ups absolutely everywhere);  above London (hanging handmade hearts from Eros’s bow high above Piccadilly Circus), under London (snoozing over my stitching on many a late-night tube train), and for London (hatching and growing the city’s biggest knitting group).

So when crafty publishers David & Charles contacted me about writing a book it was all I could do to muffle the flapping, fluttering cooing chaos that broke out inside my head as the potential for pigeon to meet pages suddenly became real.

Lucky for me D&C thought pigeon purling, kicking off a book that brewed up everything there was to love about London and turned it knitwise, was a bloody marvellous idea.

Whole lot of stitching going on

The next six months mainly consisted of me: stitching till my arms dropped off (it is a little known fact that for the unsettling workaholic reattachment of arms comes as standard with the cure-all of a rest and a steaming cup of tea); scribbling Londony words all over every piece of paper in sight (“Cor blimey, me old mucker. Look at yer barnet!”); telling anyone who asked what I was knitting “I can’t tell you until next year.” (top secret knitting all the way!); eating emergency cake (yum); never sleeping (sleep is for losers); and running about London like a loon trying to find stitching inspiration (you may have witnessed me chatting with the now-rare (Curse you, health and safety!) pigeons in Trafalgar Square. They’re such nice folk).

While the making madness was going on the lovely D&C team cheered me on (major kudos to Katy my editor who has the patience of several saints) and made book magic with the pile of knits, pages and often slightly worrying ideas I heaped on them.

The result is a book of my fair city turned knitty. It is crammed full of my favourite London-flavoured things. There’s manky pigeons, cockney rhyming slang, tiny oddly cute royalty, speculation on the weather, city stories, office banter, grand old monuments, tall tales, endless cups of tea and slices of cake, some totally useless craft tips (and some good ones), and puddles of Thames Water all over the patterns inside.

But most importantly there’s the invitation for you to live, breathe, stitch and show off the city knitter you are. Stitch London isn’t about my London, it’s about yours. My city knits are just there to get you started. It’s a call to sticks and string where you’re invited to take your first few stitched steps into the world’s greatest city (hey, it’s my home. I’m allowed to say that). Whether you’re just starting off your journey into stitching or have all ‘the knowledge’ I’ve made sure there’s a bit of Stitch London for you. 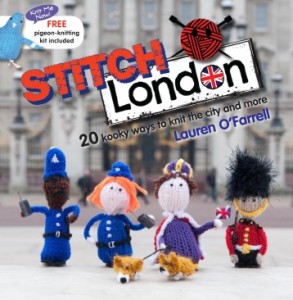 It's alive! Alive I tell you!

The book is dedicated to three sets of people:

For every Stitch Sage who has ever passed on the love of the knit at Stitch London. You’re an inspiring bunch. – I wanted to say thank you to every one who has taught at Stitch London over the years, be it under the title of Stitchette or Stitch Sage. Giving their time up for free to create new knitters. What an amazing bunch of human beings they are.

For Laura, Georgia, Grace, Sophie, Brigitte, Katie, Joelle, Candice, Emmy and Frances, the first cast on row of Stitch London, who taught me the way of the knit. – These were the fabulous co-founders and first members of my little knitting group (most of them pictured above), back when it really was just a little knitting group. They are the people who taught me the way of the knit, plied me with cake and cheered on my three-year battle with evil cancer. Ladies, my handmade hat is off to you all.

And for lovely Sam, Prof Lister and all the staff of Bodley Scott at St Bartholomew’s Hospital, without whom this knitter would not be knitting today. – It goes without saying that beating the stuffing out of cancer is a triumph beyond any other. If it hadn’t been for the team at Bart’s I would have been toast. And not nice hot buttery toast with marmite on it. The stale unappetising toast that has to be scraped into the bin. There are no words for how grateful I am to these people. None at all.

Beating the stuffing out of cancer

And lastly a MWA HA HA HAAA in the face of cancer. At the same time as the book is published I’m celebrating 5 years in remission from my fight with the Big C. With this in mind all sales of this book support Leukaemia and Lymphoma Research to help other people beat the pants off cancer too.

And to say thanks and celebrate there’s also a book launch! Come to the launch on Wednesday October 5th at Foyles on the South Bank! More info here.

All Aboard! Welcome to Stitch London

I am heart-squeezingly proud of Stitch London and welcome purly king and queens to venture in and get lost in its pages.

I’m will be introducing you to each of Stitch London kooky little knits in this blog. They’re all eager to meet you and tell the story of how they came to be. I’ll start tomorrow with the star of the book, Cooey the Pigeon, as she features in a special kit in every single book. I suspect there is going to be a serious stitched pigeon infestation coming our way.