Knitblast the Fifth: I just purled to say…

There are places in the world where no one likes to be. Hospital is one of those places. Hospital smells of disinfectant, overcooked vegetables and fear that you can’t speak of until you get home and blurt it out over a nice cup of tea and a decent slice of had-a-bad-day cake.

St Bartholomew‘s, sitting quietly in London’s Smithfield district, lives in the heart of the City’s square mile, smack bang next to the blood and sawdust of London’s oldest meat market (where many famous people were horribly executed, including Braveheart himself, William Wallace).

In direct contradiction to the slaughtering of many species that went on next door, the hospital has been making people better for more years than you’ve had hot dinners (though I can’t say I recommend the hot dinners at Bart’s. Oh the horror of the ‘meat’ and ‘vegetables’ they serve to patients). It was founded waaaaay back in 1123.

It was here, along a line of needles of the non-knitting kind, lethal cocktails of the cancer-killing flavour, radiation of the less ready-meal variety, and finally a stem-cell transplant regrowing bone marrow that had nothing to do with dog food, that I used all my best immune-system kung fu to fight for my life and win. 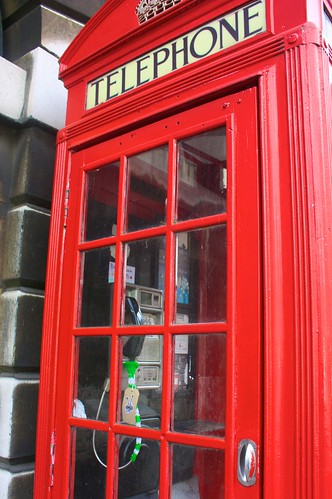 Outside of Bart’s there is a phone box. It’s a phonebox I have walked past a hundred times with good news or bad news held carefully in my head to pass on to my worried entourage. In an age where everyone’s phonecall home is firmly lodged in a mobile phone about their person, this phone box stands like a sentinel, awaiting the moment a flat battery or sudden credit drought means he’s needed. For as long as that phone box has been there it has inhaled smoke signals home to loved ones and puffed them out into the world at the other end of the phoneline.

Within its four glass and red walls the knitblast grew a healthy green shoot along the telephone cord. The cord that carried hesitant bursts of disappointing outcomes or triumphant victories into wires, then out of wires into ears. Wrapped in a survivor’s stitching I hoped it might help others to hang on, because often in the most unexpected way life blooms and you live to fight and yarnstorm another day.

If not then at least it might make this conversation happen:

“I think someone has knitted a bit of this phone”

“No I’m not sure what the side effects of these drugs are but I’m pretty sure someone’s knitted a bit of this phone box.”

“No I have not been drinking!”

Or it might inspire the odd card-wielding call girl to put some clothes on.

Well I've seen the doctor and...