Jaisalmer (Thar Desert): “In the morning we go to meet your camel.”

Posted by Deadly Knitshade on Nov 27, 2008 in Animals, India, Knitting, Once in a Lifetime Stuff, People, Purl Interrupted, Taxis and rickshaws, Travel | No Comments

Writing from: Varanasi internet cafe, where other people are arguing with the owner over how long they were online, and I look forward to doing so later.

I was first introduced to my camel as Michael Jackson (the camel’s name, not mine), but I later found out that his real name was Rallu. A much more camel-sounding name if you ask me. Which the camel did not. I am guessing that, had he had more access to tabloid newspapers, he would maybe have found a less controversial moniker, but camels don’t tend to go to the newsagents too often. And they rarely have the small change to buy a newspaper when they do. 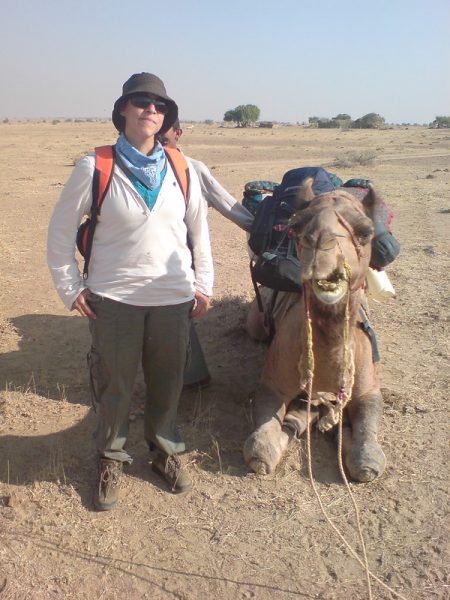 Michael Jackson and his burden

Michael Jackson and I saw eye to eye in the only manner that a five-foot-four-and-a-half (that half is very important) girl and a 13-foot camel can. He begrudgingly carried me in a manner that mostly kept my heart from leaping up into my throat, and I blindly trusted him not to throw me to the desert rocks below and smash my precious spine. It seemed a good working relationship to have with a one-humped beast.

The day before the camel trek we (four of us: me, M, Tito (ever-happy Catalonian Spanish guitar guy), and Oscar (newly met Spanish bloke with an evil laugh and the urge to jump off things without looking)) had a ‘sit down’ with our camel guide, Baba. Tito had been passed Baba’s number by camel-safari-enthusiastic Argentians, and so it was Baba we called to take us into the desert. (Scroll to the end for the number, and go camel. Do it.)

The sit-down went very well. We drank chai (“Baba pays for chai! You are his guest!”), and haggled over prices until everyone was happy, and much manly shoulder slapping went on.

Baba was a sunbaked streak of a man with a quick smile and a loud laugh. His catchphrase was “You happy, I double happy!” and he said it a lot, accompanied by a genuine smile, a hearty slap on the back, and at one point a ‘You my brother!’ bearhug with M. 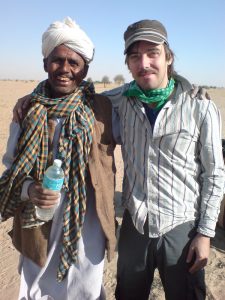 He decided after our sit down (which ended with the line “In the morning we go to meet your camel.”) that M was boss, and told us so. For the rest of the trip he would cry out “Michaaaaaaaaaaael! You ok?!” and if the reply was affirmative (and with Baba how could it be otherwise?) he would say “Ahhhhhhh!” and throw in his ‘double happy’ line to remind us he was. “If Michael okay,” he would say to us all, “Everyone is okay.”

Accompanying us on our trip were three others: Stephan, a round-faced relaxed German, and Nic and Yuri (from Leichenstein and Italy), both very tall and backpacker-haired.

Michael Jackson was chewing languidly when we met (I learned that he did this a lot, and was often half hypnotised by his lower jaw dipping rhythmically from side to side), and met my “Hello. I am your human for the day.” greeting with a long-lashed stare of indifference.

Here, for those of you who may one day ride a camel of your own, is the careful instruction I was given by my 13-year-old (at a guess) camel boy (whose name sounded like Mando, but was promptly lost in my climbing-onto-camel fear):

“Get on.”  I did, with great heaving floundering difficulty, there being nothing to get on with except the ropes used to tie on the ‘saddle’.

“Hold on.” I looked for something to hold on to. I found nothing but a three-inch stump of metal (which would later cut a large hole in my trousers) that was mostly covered by the strap of my backpack. 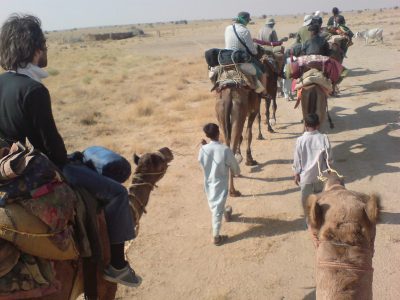 “Ok!” Michael Jackson clambered to his feet, rear legs first, tipping me headwards (I squealed quietly) then back legs after, throwing me back just enough to keep me on (wobbling).

“We go.” Michael Jackson sways into action, me frantically scrabbling for a handhold.

And that’s all there is to it. Easy really. Honest.

Easy for about an hour. Then a bit uncomfortable. Give it a while longer and it’s hurty. Give it seven hours in the desert sun and I don’t want to do it anymore, and you can’t make me. All of us, except the guy from Lichtenstein who was hardcore, decameled on the last day and walked the last hour and a half. I say walked but it was a very bow legged walk. A walk of the wild west, I like to think. 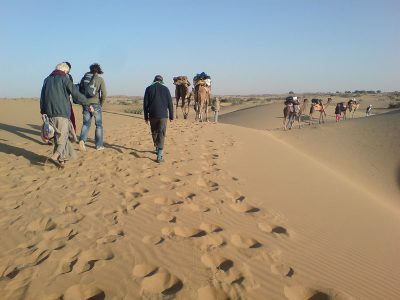 Despite the camel soreness I took away some moments that made my John Wayne walk worth it:

Seeing M in socks and sandals due to the cold.  It’s not fashion. 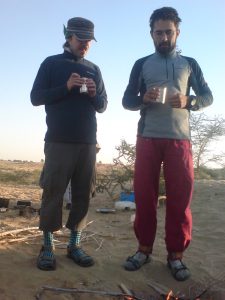 M and Oscar are not fashion 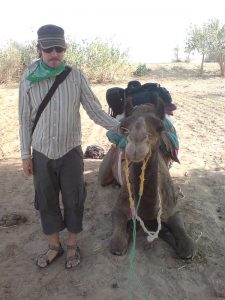 M and Charlie, his faithful camel

The whole-sky spread of colour as the desert-red sun dipped gracefully below the undulating sand dune horizon. 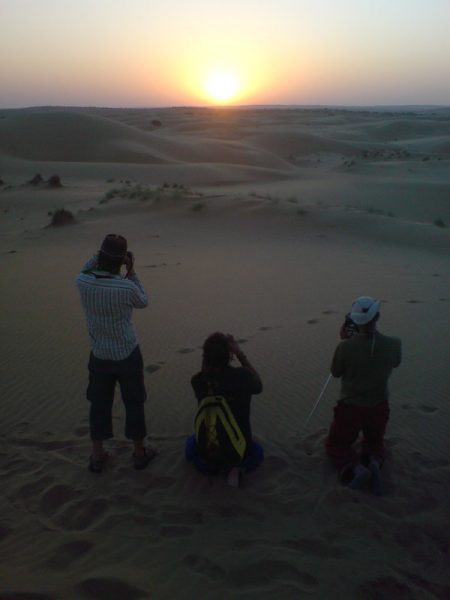 My good friend Christopher Walking (named due to him being a deerhunter, and because he spends his time walking the desert looking for people to wag his tail at), a bouncy grinning dog who appeared on the dunes at sunset, and didn’t leave us for the whole of our trek back to civilisation. He ran apace with Michael Jackson, occasionally shooting me ‘you still there?’ looks, and once dashing off after two panicky deer and returning with a hooved leg in his mouth (which was clearly very old, and a bit rotten and not from the deer he had just chased. A here’s-one-I-made-earlier leg). We fed him bourbon biscuits. He was a fine beast. 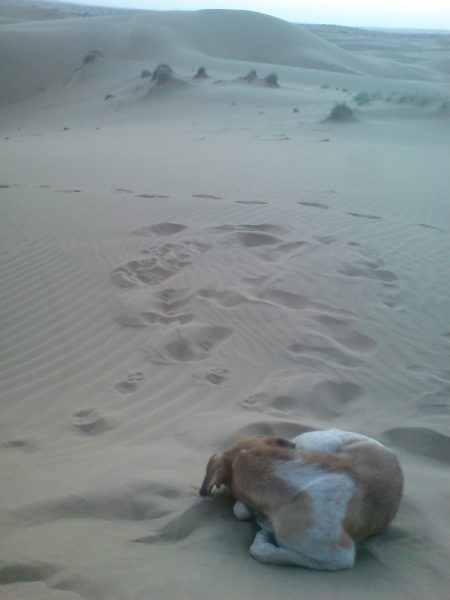 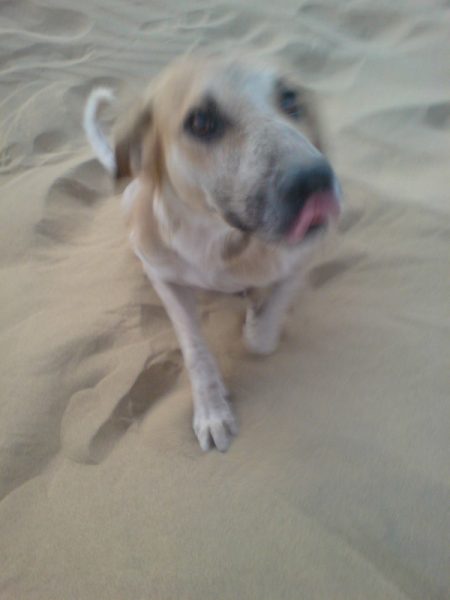 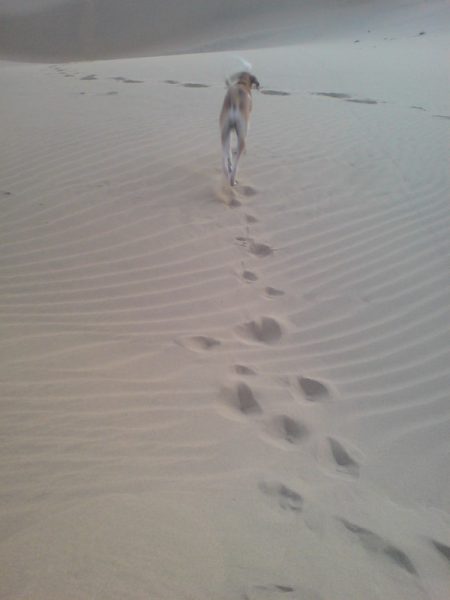 Best of all was the night-cold tip of my nose tingling as I lay on my back, the last one awake, under camel-scented (mmm hairy) quilts pulled right up to my chin, blinking up at more stars than I have ever seen in my life which served as my bedroom ceiling. The only sound the tinkling bells of the still-chewing camels, and the hiss of the desert breeze-blown sand.

It is the first time I have ever seen a shooting star and had no desire to wish on it because everything I wanted was right where I was. 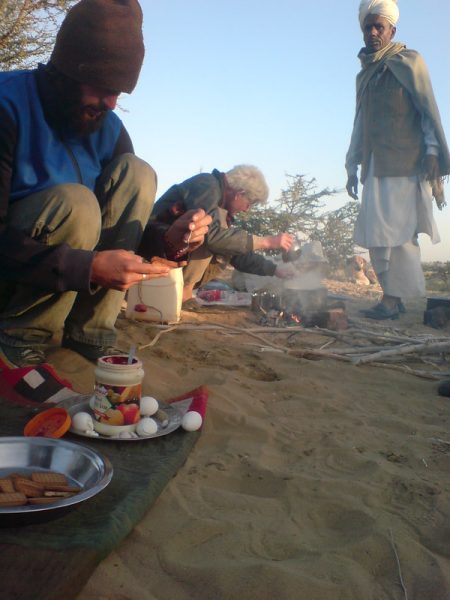 Desert breakfast will have sand in it. Sand is good for you. Honest.

Well, travelling this certainly is. I have also temporarily renamed myself, Deadly Knitshade, Knitting Queen of the Desert. I really just can’t be cool anywhere, can I? 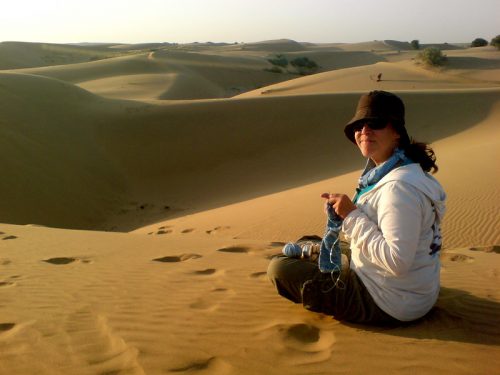 Knitting Queen of the Desert

Finally back to civilisation, Michael Jackson did not even wish me goodbye. He just wandered off, looking oddly naked without his saddle, to chew at a tree. Camels truly are pretty damned odd things. I’m sure he would say they same of humans, to be fair. And he’d be right. 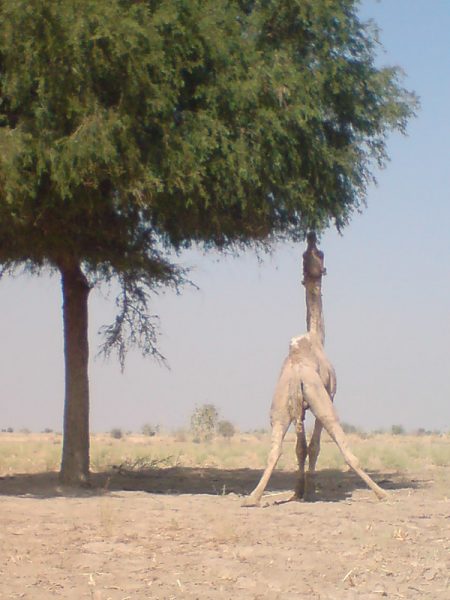 For those of you who fancy a go yourself I have promised to publish Baba’s mobile number here (with the code if you are outside India (00 91) 9982 084 892. Phone the man, bypass paying hotels and travel agents a ton of commission, get camelsore, and have Baba tell you how happy he is. Tell him Michael sent you. Go on.