Smack bang in the middle of London there was once a sad and barren roundabout. It was the muddy and miserable home of a few sad shrubs, and it sat feeling friendless and alone, and watched the London traffic trail by . Sigh.

And then one day in March 2006 a group of sneaky folks with spades turned up and did more than a little digging. Sixteen people lavished £200 worth of plants and ten hours of nefarious night-time green-fingered gusto on this empty little city space.

They planted 114 lovely lavender bushes and a collection of plants and bulbs of various kinds. They pulled up weeds. They made something lovely in the middle of London, and off they went into the night.

And to prove it here’s the entry from the shiny new (at the time) Guerrilla Gardening website: 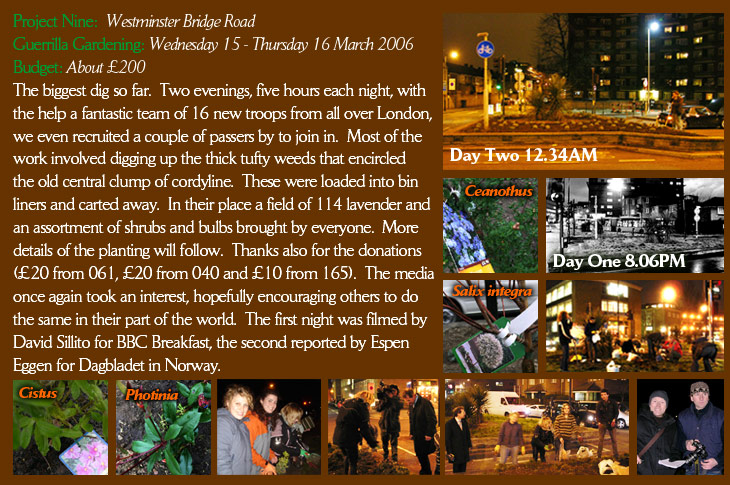 Being utterly in love with street art in general I fell for the idea of guerrilla gardening pretty hard when I first twigged (sorry) it existed. Alas, I was busy dashing about putting knitting on things and never got round to joining in. 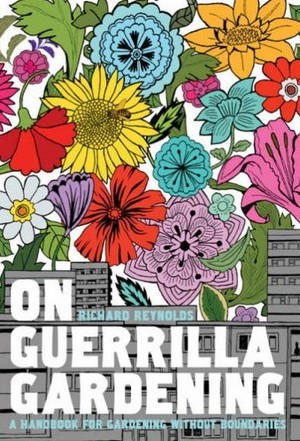 Guerrilla Gardening kicked off officially in New York, when the Green Guerillas (they could only afford one r back then) turned a vacant lot into an urban jungle back in 1973. Over here in the UK the first shoots of sneaky landscaping are attributed to Richard Reynolds. Richard literally wrote the book on the subject. His On Guerrilla Gardening is a fascinating and inspiring read. I highly recommend you cram a copy into your brain via your eyeballs.

I was lucky enough to meet Richard in the arty awesomeness of Tate Britain earlier this year and discovered that we’d both come from very similar directions with our sneaky street art (and yes, I do consider guerrilla gardening to be street art. Take a look at any patch of unexpected green and tell me it’s not).

Oddly we were both interviewed by the BBC’s David Siletto on one of our very first forays (see my interview here. Woolly sunshine. How innocent my intentions used to be). We both did what we did for free and often spent scary undisclosed amounts of our own money making it happen. We were both responsible for giant Godzillas of communities that had unexpectedly grown up around our ideas.

After meeting Richard I vowed to go guerrilla gardening. Dammit!

Life took over and I wrote books and carried on making my woolly art. In the back of my mind those guerrilla gardens were still beckoning with their tendrils of temptation. Their cries got even louder when I decided to combine green graffiti with my graffiti knitting for a project in my new book (more on that later, I promise).

Finally I could stand the rustling no more. And Twitter came galloping to my rescue as ever: 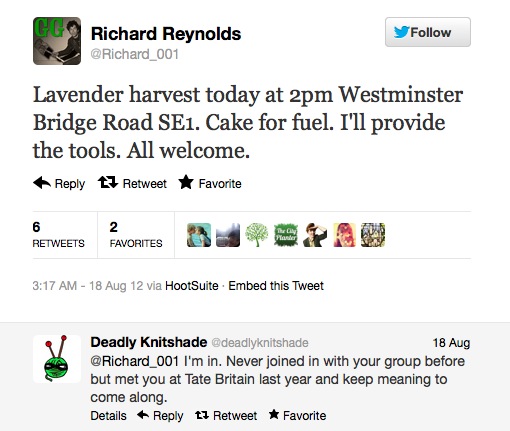 Oh social media. How I love you.

And so I set out in the scorching summer sunshine (with Gary, my trusty companion) to ruthlessly chop the head off lavender bushes in one of London’s most infamous guerrilla gardens.

We met and smelt the lovely lavender. I refrained from telling it I was about to behead it. It looked so fantabulous.

Hello Urban Lavender. I have come to chop your head off.

Richard and the lovely Lyla showed us how it was done. They also brought along a car full of tools, bags and most importantly cake and watermelon. The generosity of street art makers never fails to make me grin like an eejit. Hats off to Richard and Lyla for their amazingness (and what an excellent hat it was too).

The 'grab and chop' demonstrated by the masters

They handed round the gloves and the GIANT SNIPPY SHEARS. Woo hoo! Weaponry. Street art with weaponry is well within my comfort zone.

I'm just going to take a little off the back. Going anywhere nice of your holidays this year?

A basket of blue. We made this! Sort of.

There was a whole lot of lavender. A dozen of us took around three hours to harvest the pungent petals. Three hours of outdoors living, standing up to my knees in a sea of sniff-worthy stuff while the traffic rolled by. What a glorious way to spend a summer afternoon.

The lavender has you surrounded! No sudden moves!

But wait?! In amongst the snipping and grabbing there was another story. Who is that deep in the undergrowth, covered in a sprinkling of lavender petals? A tiny hairy wanderer. Good grief!? It couldn’t be! The famed long lost ace of the airways, flying furry female Amelia Bearheart!

When the excitement of the discovery abated I decided that Ms Bearheart was a part of the art too. I placed her on top of a freshly shorn lavender bush and there she remains. Who knows where the hairy adventurer will end up.

With the lavender harvest done the herd of guerrilla gardeners went their separate ways into the surrounding city. I was officially a guerrilla gardener at last. Another street art skill to add to my stash of sneaky shenanigans.

Street art isn’t always about spray cans. Sometimes it can be about sprigs, shoots and glorious things to sniff.

So for goodness sake, get out there and make the world a greener place. Join the Guerrilla Gardening community.

Huge handmade hugs to Richard and Lyla for making my first official guerrilla gardening afternoon amazing. And to Gary for naming Amelia Bearheart and for flicking spiders off my shirt.