Knitblast the Tenth: here be Lions

The Stitch and Bitch London Knit Crawl for Worldwide Knit in Public Day. 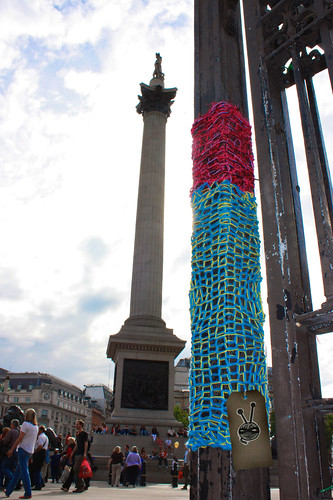 Stop four. The final stop. Trafalgar Square under the watchful gaze of Vice Admiral Horatio Nelson and his four lions.

South-East Lion: Gawd blimey I wish these bleedin’ tourists would stop clambering about on me ‘ead. I sit ‘ere all day guardin’ the Vice Admiral and what thanks do I get, ay? Day in, day aht bleedin’ tourists drippin’ ice cream on me barnet. ‘ang about! Woss goin’ on over there? Oi, you! Girlie!

*quickly stands in front of knitblast*

South-East Lion: You know very well I mean you, sunshine. What the bloody ‘ell do you think you’re playin’ at with that pink and blue thing?

South-East Lion: Decorrrrating, she says! With a bit of knitting? Would you Adam and Eve it? This is Trafalgar Square, young lady. Not your ‘ouse!

South-East Lion: I don’t care if it’s Worldwide Pull the Wool Over the bloomin’ Queen Muvver (gawd rest ‘er soul) Day. You get that pink and blue two and eight orf there! That’s the Charring Cross tube station entrance, you toerag!

*Deadly Knitshade looks up with a slightly evil glint in eyes*

South-East Lion: Oi! Get back ‘ere! *sighs* Bloomin’ graffiti knitters. Back in my day knittin’ stayed in the ‘ome. Admiral Nelson’s gonna ‘ave me guts for garters…

(A little help for those who don’t speak English English)