I was a typical mild-mannered London-dweller. A comfortable-shoed, giver-upper of seats on the bus to wobbly octogenarians, wandering Borough Market for free cheese samples, feeling cold for the peregrine falcons that live on the Tate Modern tower in winter, and feeling at home between the paws of the Trafalgar Square lions. I could recite Northern Line stations like abstract poetry and was well aware that ‘open’ buttons beside tube carriage doors lie.

I was a knitter much like any other knitter. Stitch by stitch, behind closed doors, needles placed neatly in their holders, yarn wound into round, easy-to-manage balls. My skeins were tangle free.

Until one terrible night… 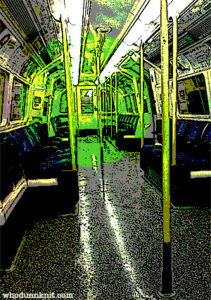 Oyster card in hand before the ticket barriers, I weaved through Waterloo station’s last-train crowds like a Nintendo game. I found myself alone on a Northern Line tube. It was much too late at night. Weary to my bones from a hard day of mind-muting office dronery, I knit quietly in the deserted carriage. There was not another soul in sight. The clicking of my needles was drowned out by the rush and rumble as the great grey metal underground worm crawling in the belly of the city. My eyelids begin to droop; it’d been a long day…

A halt. A ball of yarn rolled from my lap and unraveled to the floor of the carriage. The carriage lights flickered and dimmed. Out there in the darkness beyond the grimy window glass something was moving.

I called out, my voice muffled in the underground silence. I tapped on the driver’s door. I pressed at the alarm button. Nothing happened. No one came. I was alone. Under London. In the dark.

A whirring echo and suddenly the far end of the carriage was filled with an acid green light. Dark lines were thrown across the seats in a spider web of shadows and a sharp burnt chemical smell began to fill the space. The light moved up the carriage inch by inch. As it touched discarded newspapers and empty kebab wrappers they lit up like Christmas decorations and then disintegrated in a glow of green. London’s underground train sanitizer was awake and was hungry. The light advanced. 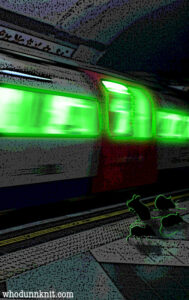 Scooping up my yarn and needles (priorities), I raced for the door between carriages. The door stuck. Behind me the light slowly ate its way down the carriage. I started to freak out. My eyes watered, my vision blurred and as the light got closer the ends of my hair and my fingertips begin to glow. AIIIEEEEEEEEEE!!!!! I had to get out!

Desperate, I jammed both needles behind the door handle and heaved at the lever to open.

Outside something smashed at the window panel, which shattered in an explosion of sharp glittering pieces. Before I could move a rippling furry black tide flowed in through the broken window, covering me from head to toe. It ebbed back just as the light surrounded me, and I was dragged to sudden safety on the tracks. The light passed slowly above into the next carriage. Phew.

My head hit the tracks hard. My vision started to fade but I thought I heard high-pitched squeaks of triumph and felt the flutter of small paws. My tiny saviours lifted my body and moved me towards the yellow light of the station as I finally passed out. 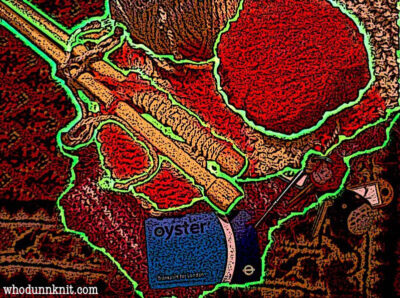 I woke up on the cool concrete floor of a signless tube platform. An army of stabby pains behind her eyes, coughing green smoky stuff from my lungs. In a haze of dark stairways and dank broken-tiled passageways I stumbled my way to the surface, hailed a taxi and was ferried home.

As I dozed off that night I saw the small cuts from the broken glass glow a faint green in the darkness of my room. My yarn and needles, abandoned on the floor as I fell exhausted into bed, give off the same greenish light. A connection hung in the air between me and the knitting like toxic gas.

I sat up in the dark. A green light flicked around the edges of my vision. Silently I rose and felt across the floor until my fingers met the soft glow of the discarded knitting. There was a faint otherworld hum. I heard myself give a quiet giggle. 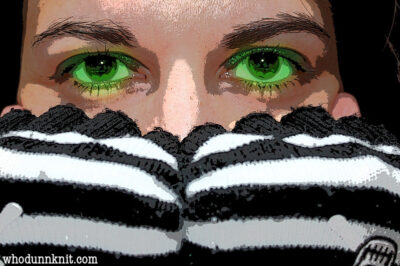