Who the hell does she think she is? Well?

Beginning her plans for world domination through a weaving of words and wool during a rather nasty three-year battle with cancer (Hodgkin’s Lymphoma to be exact, an evil cancer of the lymph system),  Lauren emerged from treatment victorious, slightly radioactive and unsettlingly ambitious. Read all about it here if you dare.

She is the founder of the UK’s largest craft community, a pioneer in the world of graffiti knitting, and a published author. She also wrestles squid and makes quite a nice cup of tea. 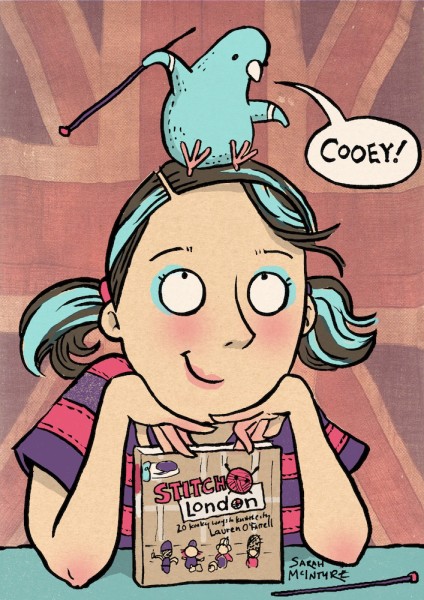 Sneaky grafffiti knitter: In early 2007 part of Lauren became sneaky stitching graffiti knitter Deadly Knitshade after a mysterious life-changing incident on the London Underground. She managed to keep this sneaky stitching life separate from her Lauren side until fairly recently when becoming an author messed up her Banksy-style mystique.

New word maker: Lauren coined the term ‘yarnstorming’ to describe graffiti knitting. A softer and squishier term created as an alternative to the more violent and destructive-sounding ‘yarnbombing’).

Graffti knitting innovator of stitched street art with stories: Lauren pioneered the trend to use amigurumi characters and items in graffiti knitting to tell ‘stitched stories’ and show themes. Check out the ‘Graffiti Knitting Explained’ page for more info.

Odd stuff knitter: Lauren’s personal knitting accomplishments include a corset for a week-old piglet, a single sock knit at both the Taj Mahal and 3500-metres up the Himalayas, and Plarchie, an 8-metre giant squid for London’s Natural History Museum made from 160 plastic carrier bags.

Craftstormer and Vandaleyes Menace: Lauren can make street art with anything from a handful of googly eyes, to rubber bands to a simple ball of blu tac. She is suspected of using googly eyes to ‘vandaleyes’ random objects where ever she goes. There really isn’t anything she won’t attempt to make street art with. It’s all a bit odd.

International author of mystery: Lauren writes books. Something she has dreamed of doing since she was old enough to brandish a pen. *Snoopy dances*