Cooey the Pigeon, fibre-feathered cult icon of the internets and star of the Stitch London book. Who wouldn’t want her tiny woolly form to take home and perch about your humble abode?

Well here’s the thing. You can’t win the real Cooey. She’s my pigeon and I’ll fight anyone who tries to make off with her. I mean it! I have pointy sticks and no regard for the rules!

BUT you can win your very own Personalised Purly Pigeon! WOO HOO!

In honour of Red Nose Day 2013, raising money for Comic Relief to help change lives in the UK and Africa, I’m offering one lucky pigeon stalker the chance to win their very own handknitted Pigeon! Every single sponsor on my Sponsor Page will be entered into a draw to win the Personalised Purly Pigeon of your dreams.

Button Text
Not in the UK? You can donate via Paypal to lauren@whodunnknit.com and I’ll add your donation to the total. 🙂

On March 16th 2013 I will randomly choose a winner from the sponsors and contact them via email to find out their pigeon-based requirements.

This coveted pigeon will be knitted and customised however you please by me. Your woolly wish is my command! Want a Dr Who Pigeon complete with tiny Tom Baker Scarf? DONE! Want a Goth Pigeon with way too much eye make up and a clumping pair of New Rocks on its pigeon feet? DONE! Want a Pigeon that bears a striking resemblance to your Auntie Beryl? DONE!

Here are a selection of some of Cooey’s cousins and costumes to give you an idea:

The winner’s pigeon will arrive in an exclusive signed Whodunnknit box as a limited edition of 1, and I’m throwing in a shiny new copy of my Stitch New York book signed by me, Cooey the Pigeon, Plarchie the giant knitted squid, and Scuttle the Cockroach to go with it.

To add to the madness Cooey and I were asked by TV’s Emma Kennedy to add our fundraising effort to the celebrity charity face off that is the #twittermillion project. Where a whole load of lovely celebs are desperately trying to raise a cool million pound on Twitter, while competing with each other for Twitter glory.

The fantabulous Ms Kennedy even invited Cooey into her tent live on stage for her 25-Hour sponsored Tent, Bucket and Me event 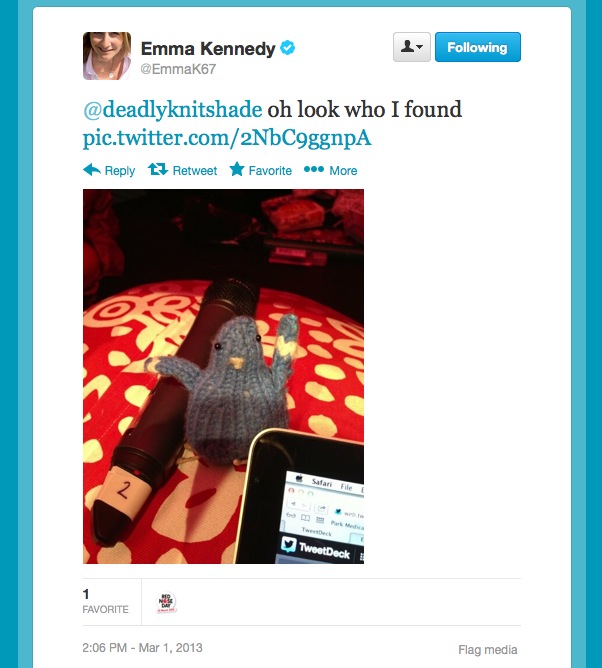 Cooey hasn’t been quite the same since her tent visit…

So Cooey and I encourage you to hop on over to Emma’s #teamkennedy page and join Team Kennedy in doing something funny for money and helping a splendiferous cause.

What the heck are you waiting for? Sponsor us and soon you could have your paws on the most pleasant purly pigeon you ever pictured. Swoon.