Craft with Cooey: how to love the snow

Posted by Deadly Knitshade on Feb 12, 2012 in Beasts, Birds and Creatures, Cooey the Pigeon, Craft with Cooey, My Knits, Tutorials and How Tos | 13 Comments 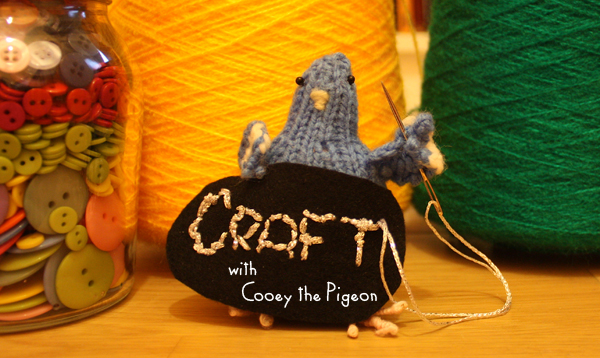 London has been covered in lots of lovely snow twice over the last few weeks. This means three things:

1. London transport grinds to a screaming halt and the city falls into panic.

2. The snow moaners appear on all sides cursing the winter wonderland that has appeared and shambling about in too many layers searching for hot chocolate.

3. One very excited pigeon gets to see snow for the first time since she was hatched.

Yes, I know that London can be a difficult place to navigate when it’s covered in snow. I know it’s cold. I know the trains are all buggered and the pavements are slippery. I know all of this.

And yet I can’t help being utterly in love with snow any time it falls. It’s just bloomin’ beautiful and the sound it makes under your shoes when you step into the snow is my favourite noise in the world. And Cooey the Pigeon, peering out of the window on the first snowy morning, wholeheartedly agrees.

So she talked me into writing a post for all you snow moaners out there. Here’s the second in the Craft with Cooey series…

How to love the snow (with Cooey the Pigeon)

We’ll begin with footprints. Footprints in the snow are the best thing ever. Why?

Well, you can make your own: 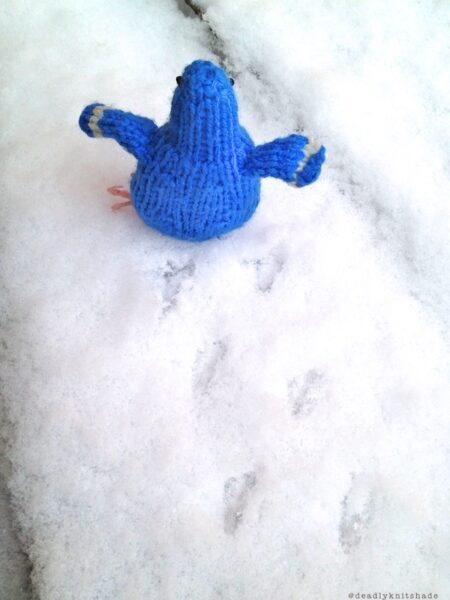 And you can spot the footprint of loads of other wildlife. So you know who has been stalking about in your garden: 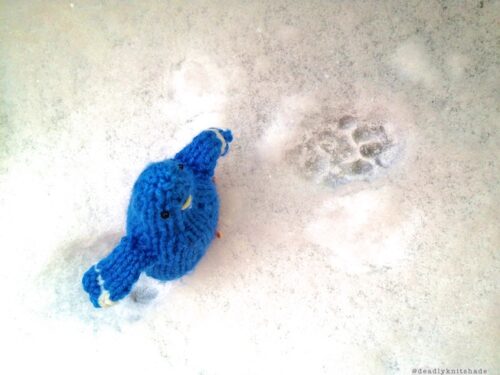 Cooey suspects this is not her own footprint

Next, everything looks incredible. Everything. Even the compost bins at the end of your garden look great in their snow hats. 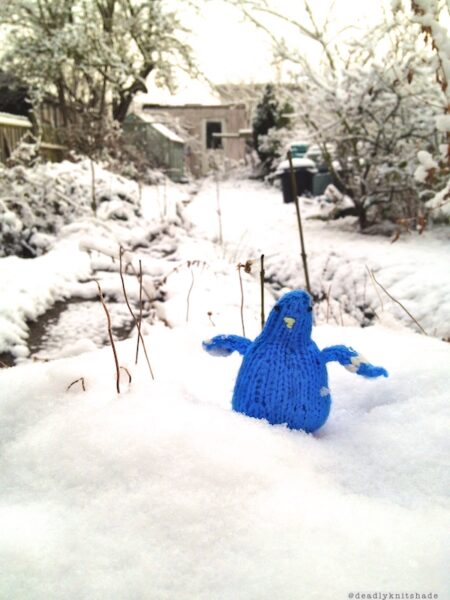 And unexpected snowdrifts are fun too. 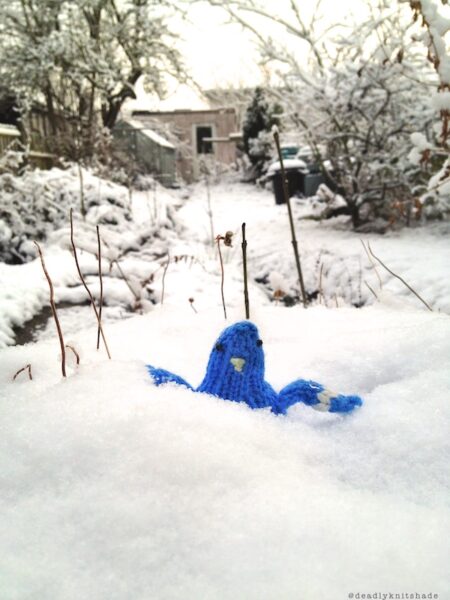 Cooey is almost swallowed by the snow monster. A little help here?

The snow turns every branch into a handy bird sofa. 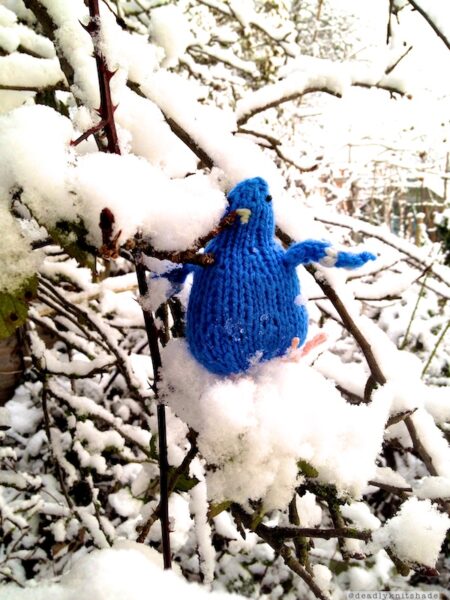 Perching on a snow sofa is much easier than skinny branches

You can make beautiful snow angels whereever the snow is flat enough: 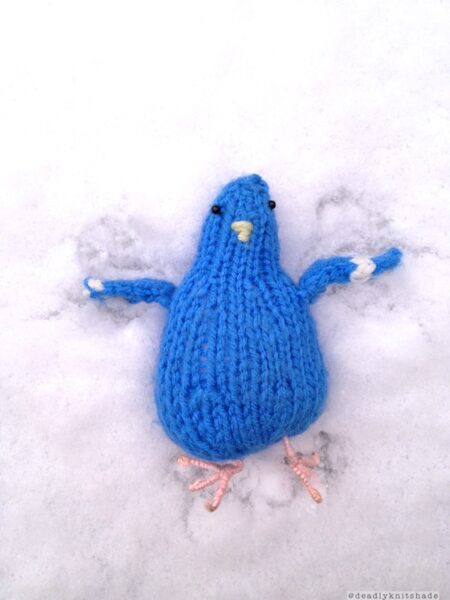 All food tastes better when you eat it in the snow. Fact. 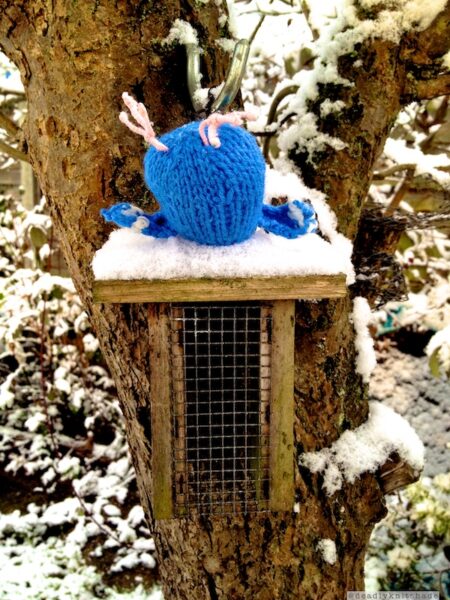 The squirrels have clearly been here. No food for the pigeon.

And you can challenge friends to SNOWBALL FIGHTS! 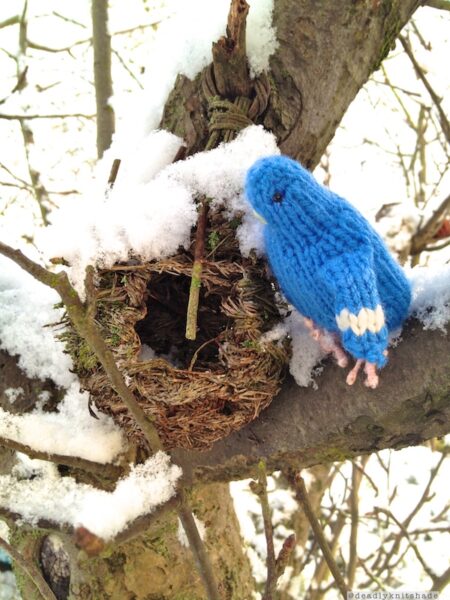 Hello? Is anyone in? Fancy a snowball fight? 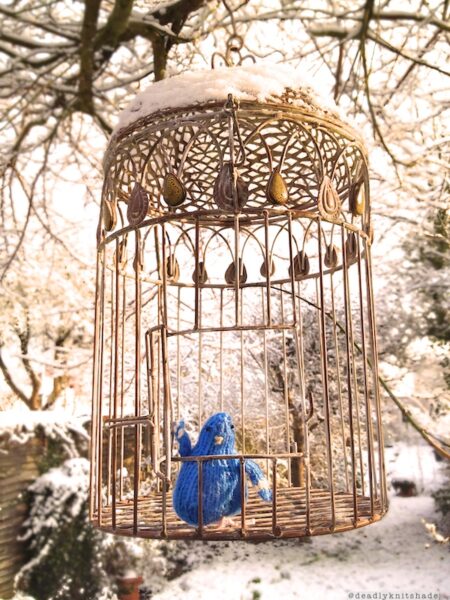 They flew where for the winter? South? Wha?

And if your friends don’t want to play? Well, you can make friends of your own. From snow! 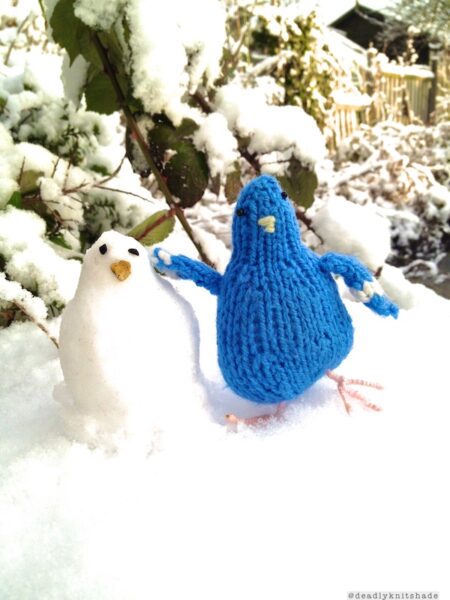 In fact you can build anything at all from snow: 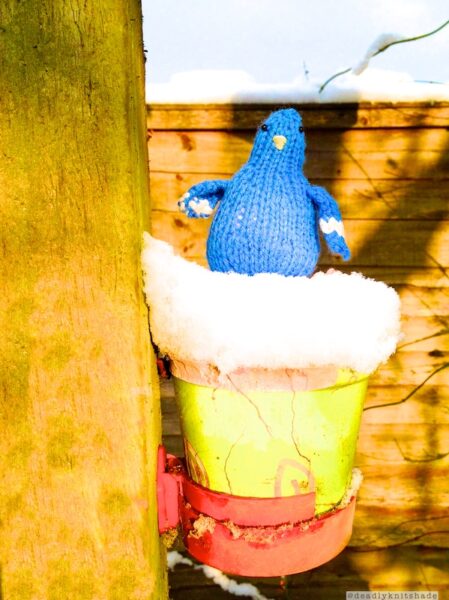 The snow nest. A bit chilly on the tail feathers…

But really, it’s all about the snowball fights. And since the garden seems birdless I had to take the initiative. PAFF! 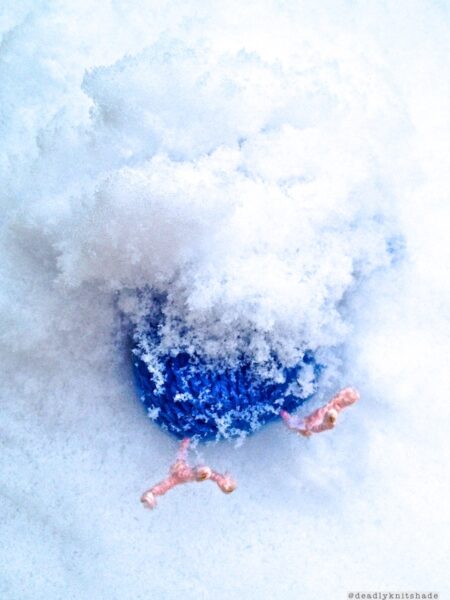 I think perhaps a smaller snowball next time… 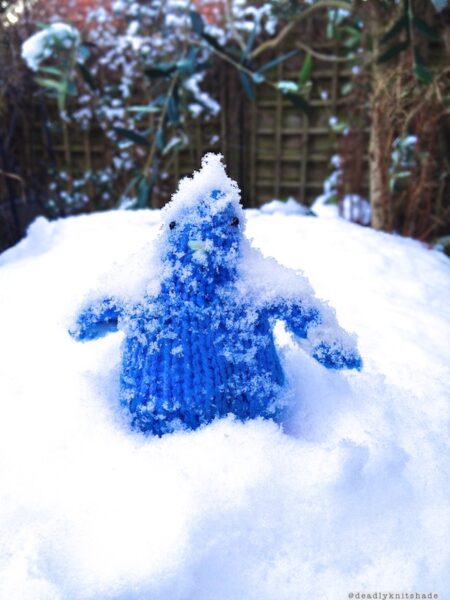 This pigeon face says “Hot chocolate would be very welcome right now. And I hate you.”

And the very best bit of snow is when everyone gets back inside, warms up and watches the snow from the cosiness of their own home.  Well, almost everyone… 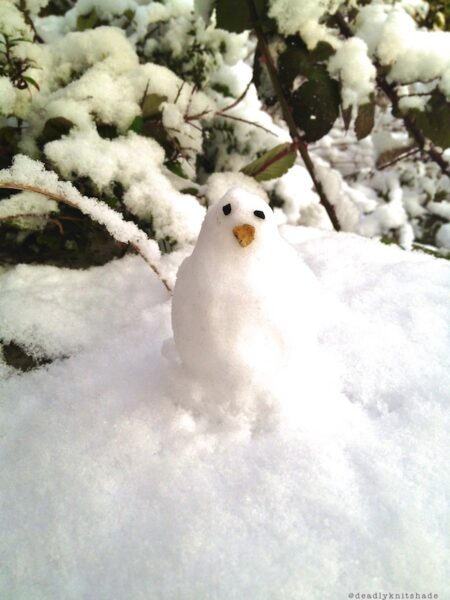 “Coo?” The snow pigeon does not get any hot chocolate.

Cooey and I wish you happy snow times and hope you thaw out as quickly as an acrylic knitted pigeon on a radiator.

[Play theme music here. We still don’t have any yet so just hum something catchy]

Want to make your very own Cooey the Pigeon? Grab the Stitch London book! There’s a Cooey the Pigeon kit with everything you need to make her in every single copy. Woo hoo!

Missing us already? You can stalk us on Twitter @deadlyknitshade and @cooeythepigeon for more crafty madness.