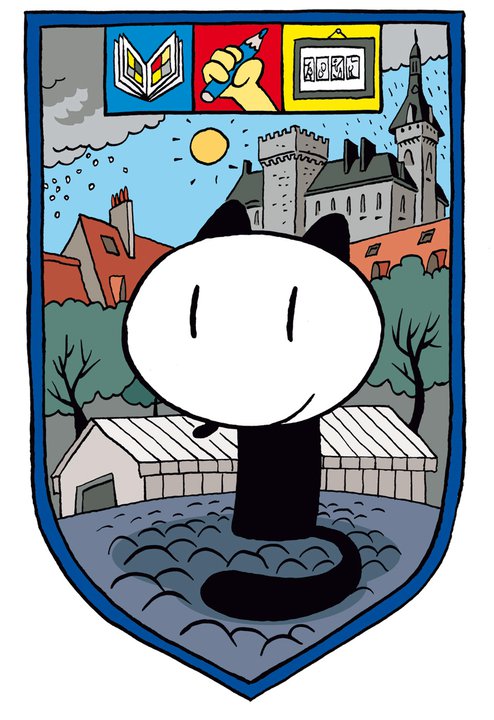 Warning: This post contains some very poor French. My apologies to all French people.

Zuts alors! What do you get if you mix one yarnstorming graffiti knitter, one pile of insanely coloured yarn and the biggest comics festival in Europe? You get the Weekend of the Woolly Wildflowers!

I work my woolly magic at The Fleece Station, a studio in deepest Deptford which I share with not one but two comics-making geniuses, and in the year or so since I’ve been there I have learned that comics aren’t all superheroes and slapstick. In fact there are some bloomin’ amazing things going in the comics world.

And the Angouleme – Festival International de la Bande Dessinee (Angouleme Comics Festival for those of us less French) is the jewel in the shiny comics crown. Everyone who is any one in comics goes and it takes over the whole city. Not just inside at exhibitions, the comics literally run wild on the streets! It’s fantabulous!

Street art is huge in Angouleme, with comic characters and all sorts of other inspiring graffiti goodness appearing in the city. How could I resist?

If you’re going to yarnstorm you have to do it properly. Since I’m not really a ‘socks on lampposts’ gal I needed a focus. Who best to knit but the festival’s mascot?

Using my sneaky stitching skills™ I conjured up a crafty version of the kitty:

And because comics are running wild in the streets I sprouted a bunch of Woolly Wildflowers to go with them:

The plan was that there was no plan. Until I saw Hergé’s head.

Hergé is the guy who created Tin Tin. And if you don’t know who Tin Tin is then shamez vous (I made that French up)!

Because he’s a rockin’ all-star of comics, Herge has a HUGE statue of his head smack bang in the middle of town. That’s some tribute…

But when I arrived another street artist had already got to him! A giant pair of graffiti glasses graced the famous man’s huge face.

Fibre Le Favre and the Woolly Wildflowers and I had a quick conference and decided we didn’t mind at all. Our street art powers combined and we think it turned out rather nicely:

As always the knits were a little nervous about being left behind:

And as always I knew they’d be whisked off to good homes by thieving swine. They didn’t even last till sunset. Woo hoo!

I wonder who has them now?

And that wasn’t the end of it. I had three more Woolly Wildflowers left and no plan at all. Which is just the way I like it.

This is where they ended up:

La Quatrième Fleur was planted in a shady alleyway at the door of our favourite crêperie (mmm crêpes). Our waitress asked if she could buy a flower when she saw me stitching away at the table. I told her sadly they weren’t for sale but if she found one she could keep it.

This was my favourite yarnstorm of the weekend:

I saw her hug the little Woolly Wildflower and grin her face off as I scarpered from the scene. Hooray for sneaky stitch stealing!

La Fleur Cinquième was planted at the bottom of a wall full of other people’s street art. As a rule I never yarnstorm at night. It’s too hard to take good pictures and it’s not as much fun sneaking about in the dark. But when I met a guy putting up graffiti tiles (see top of the wall) and sporting an extendable ladder (I need to get me one of those), I was inspired to join in right then and there.

And for La Dernière Fleur? Well, it didn’t even leave our cosy guest room.  The lazy thing. I left it for Helen, the lovely lady we stayed with.

Here’s a sneaky peek at some of the other utterly marvellous street art I saw during my woolly wildflower weekend.

PS Thanks for all the eversonice comments you’ve been leaving me. I love reading them and always try to reply so do comment if you feel like it.