Posted by Deadly Knitshade on Jan 2, 2012 in Beasts, Birds and Creatures, Behind the Handmade, Knitting, Knitting Patterns, Mice, My Knits, Random Knits | 3 Comments

Just when you think there couldn’t possibly be more mice to knit they keep multiplying. A family of six mice can turn into about 60 mice within 6 months, and it seems my mouse patterns are just the same.

It all began with my free Captain Cat-Battler Mouse for Battersea Dogs and Cats Home. In June I contributed a pattern for one little mouse. By August this had happened: 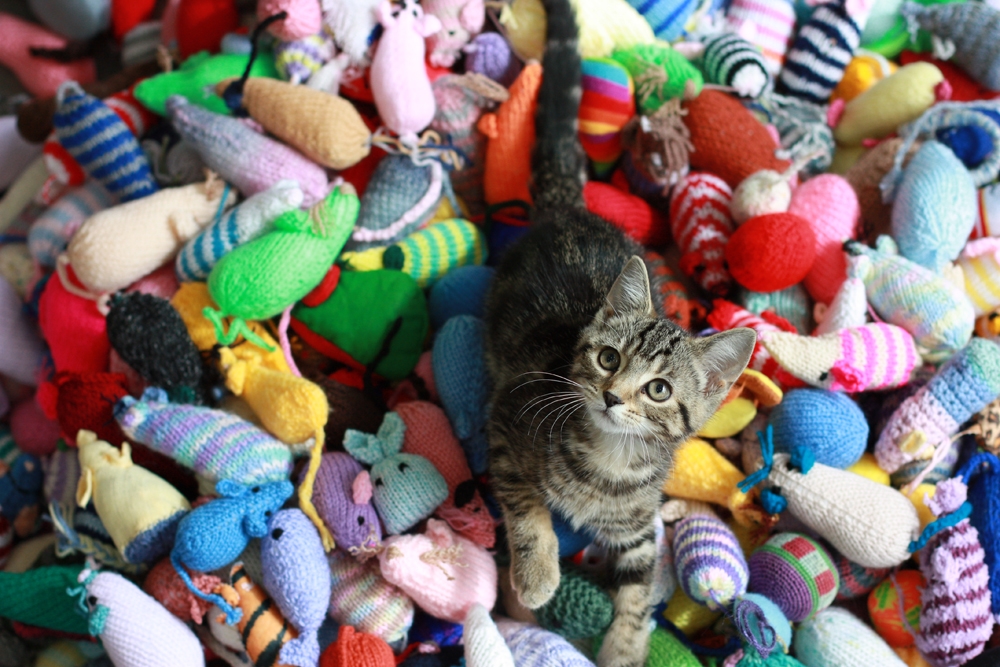 A totally overwhelming response from the world’s cat crafters. See more pics over at The Guardian who also featured my pattern on their website. Squeeeee!

Then a lovely lady called Karen Davies got in touch with me from BC SPCA (British Columbia Society for Prevention of Cruelty to Animals) so I re-branded the pattern for catlovers over there and sent it along.

In October Carolyn Beynes from the Harbor Humane Society in West Olive, Michigan, USA got in touch to ask if they could use the pattern to raise funds too. The knitters there made up basket of scurvy stitched PiRATes to sell to raise funds. 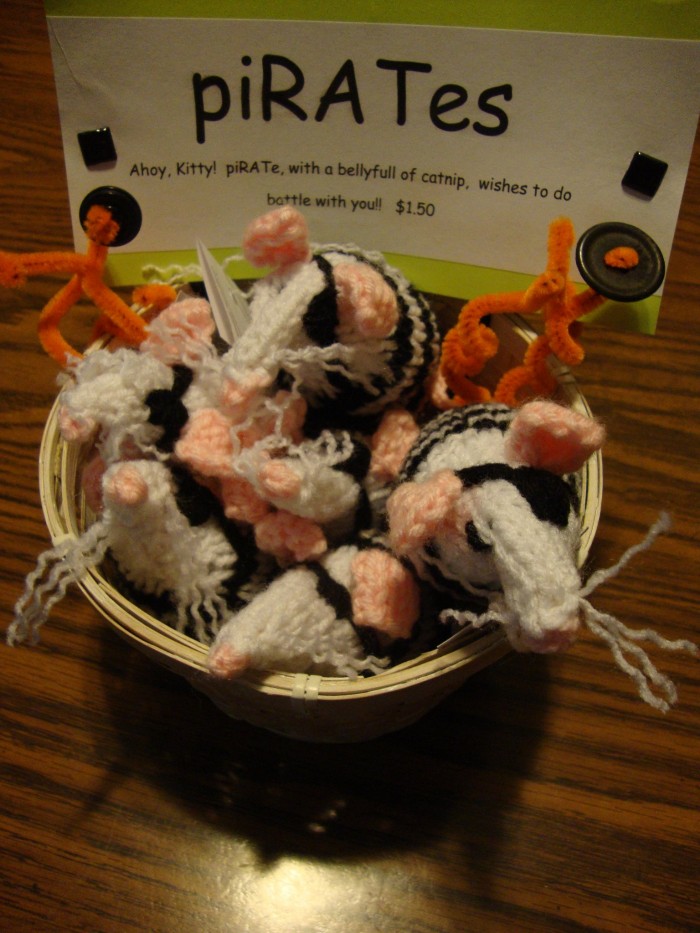 The scurvy bunch challenge from their basket of doom. (Image © Carolyn Benes)

And lastly to round off my mice of the year Kate Heppell, editor of shiny new knitting magazine Knit Now invited me to conjure up one last handmade mouse for Issue 3 of Knit Now, where they linked to Battersea’s Cat Knit Project too. Well, what’s three more mice after all?

The Crafty Catnip Mice sniff about in the yarn stash

The three handmade mice are simple little knits with very long noses (all the better for sniffing out cheese and danger) and three mouse-flavours: Eek the plain mouse, Jingle the Merry Chrismouse and Kapow the Mighty Mouse.

Eek - A laidback rodent in a world full of cats

Plus he dresses like Father Christmas all year round. He's an odd one.

Crafty catnip mice to the rescue!

Issue 3 of Knit Now is still on sale so if you fancy stitching yourself some Crafty Catnip Mice I’d suggest you rush out and get a copy.

Those not inclined to leave the house for their patterns can check out Captain-Cat Battler or Toerag the Tube Mouse for their free mouse pattern fix.

All this goes to show that one little nice gesture, such as creating a pattern for a good cause (like keeping lonely cats occupied while they wait for new homes), can turn into an infestation of nice gestures running all over the place chewing through your computer cables, nibbling at your cornflake packets and making elephants stand on chairs. Or something.

Anyway 2011 was definitely the Year of the Mouse for me. I wonder what woolly creature will dominate 2012. We shall see…