My Knit the City book is released into the wild

Stand by for a Snoopy dance, folks. The UK edition of my Knit the City book has been released into the wild! Woo hoo! 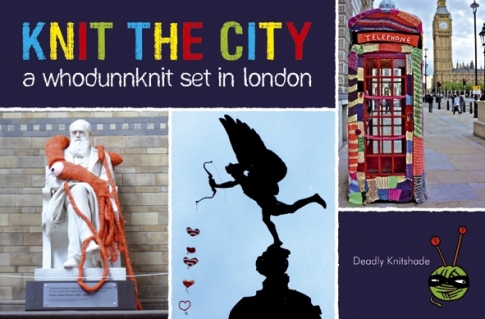 This Friday is the official Knit the City Gargantuan Gosh Book Launch at the rather fantabulous Gosh Comics. Join me and the rest of the Knit the City Yarn Corps as we bring the sneaky stitch to Gosh in celebration of our shiny new book. There’ll be fizzy booze, sneaky stitching cake and the chance to schmooze with Plarchie the giant knitted squid.

In fact the woolly romeo is currently hanging out in the window of Gosh Comics waiting for you to drop in. He has promised not to eat anyone. He may be lying.

Squindow dressing: how much is that Plarchie in the window?

Who? You, everyone else and Plarchie

If you can’t make it you can buy it online too. Though Plarchie will miss trying to eat you. So sad.

And in other book news…

Knit the City in the Wild

Two days ago I was at Waterstone’s Piccadilly drooling over other people’s books as I am wont to do. It’s a gargantuan book shop (the biggest in Europe) right smack bag in the middle of London and it’s one of my faves. It is also one of the first places Stitch London used to meet back in the days before I was a sneaky stitcher. I used to nip upstairs and paw at knitting books in their craft section.

Anyway two days ago I spied this:

My first ever sighting of the my humble little sneaky stitching tome in the wild. Doesn’t it look at home there?

Now, how about that Snoopy dance?